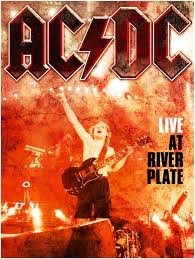 Spoiler Alert! The following review contains clichés! Snipe as long as you like, but AC/DC are firmly planted in the school of ‘if it aint broke, don’t fucking fix it’. With a combined overall age of 294,
combined sales of over 200m, and faces that only a mum could love, a guitarist who at 56 still dresses in school uniform, a singer who has worn the same hat since 1980, a rhythm guitarist who is the best in the business at his art, a bassist and drummer who both keep it simple but brilliant, play good ‘ol fashioned rock n roll, and who deserve to be mentioned in the same breath as the Presley’s, Beatles, Stones, Berry’s of the World and deserve to be treated like the Rock Gods that they are

They’ve outlived more than a few fashion trends over the last 5 decades. They stick hard and fast to the AC/DC  formula, playing pretty much the same song for the last 38years – but what a fucking song it is!!!
Filmed on the absolutely massive Black Ice tour, and shot almost 18 months ago, on 9th Dec 2009, it marks DC’s triumphant return to Argentina, playing to nearly 200,000 fans over three nights, (wearing the same school uniform and flat cap, hugely assist the continuity of splicing 3 days of filming into one seamless DVD). It was filmed by AC/DC video director David Mallet and produced by Rocky Oldham on 32 cameras entirely in HD and the quality is nothing short of spectacular. If you have the audio equipment other than a TV, the sound quality in 5.1 is HUGE. ‘Live at River Plate’ features 19 songs (110 mins) as well as an interesting, funny ‘behind the scenes’ footage entitled ‘The Fan, The Roadie, The Guitar Tech and The Meat’, ‘The Meat’, uncovers the real reason why AC/DC returned to Argentina. It also has band, crew and more importantly fan interviews and the trouble that some of them went to to get to these shows – incredible stories indeed!  This tour took them on a 20 month tour playing to over 5 million fans in 108 cities in over 28 countries, and probably earned them a shitload of money from ticket sales, t-shirts and flashy devil horn merchandise!
The DVD captures the intensity and power of AC/DCs performance as much as possible, but nothing beats the smell, feel and spirituality of a live DC gig. All of your favourites are here, from the opening and brilliant animated intro into ‘Rock and Roll Train’, ’Back In Black’, the hugely entertaining ‘The Jack’ only this version contains no boobies whatsoever, unless you count Angus’, ‘Hells Bells’, ‘T.N.T.’, ‘Whole Lotta Rosie’,’ Let There Be Rock’, ‘Highway To Hell’, and finally the mega finale that is ‘For Those About To Rock (We Salute You)’.
Nobody does rock n roll better than AC/DC and show their contemporaries as to how it should be done. Despite their increasing age, there nothing quite like a DC concert, no one holds back – especially Angus Young, and the bigger the gig, the better performance they seem to give. How couldn’t you when playing in front of a sea of 66,000 manic Argentineans a night, who give a stellar performance in their own right. To see them all jumping in unison for the best part of 2 hours is remarkable, and they sing every word, note and chord.
If you couldn’t get to see them over the past couple of years this DVD is the next best thing, or if you caught them like me at Donington, it’s a great reminder of an even greater gig. I just hope that we haven’t seen the last of them. There is definitely only ONE AC/DC
95/100
Posted by aorwxm at 22:36