Dream Theater Drummer - And the winner is........(if you can't wait to watch an hours worth of Youtube footage)

Portnoy quit the band last summer, but guitarist John Petrucci is thrilled with the new addition.
He states, "The departure of our lifelong bandmate and friend was an unexpected and truly heartbreaking blow... but when we played with the infectiously positive powerhouse of a drummer that is Mike Mangini, we knew we had found a silver lining to what has been, by far, the most challenging episode in our musical lives."
Singer James LaBrie adds, "I had the privilege of working with Mike on three of my solo albums, so I knew he would be a huge contender. He is without a doubt one of the most intelligent, intuitive, interpretive and virtuosic musicians I have ever played with."

If you have wathched with interest (like me) you'll all have had your favourites. I myself called this one correct after watching episode 1, such was the response from the DT guys. However as the try-outs progressed, I would have been really happy if Peter Wildoer would have landed the drum seat. He looked like a guy who could take DT onto a different level. Marco Minnemann also excelled and either would have been a great choice for the band. In saying that, all of the drummers who tried out, were excellent. All brought their own bit of magic to the band, and were unlucky not to get the position

Portnoy is a big pair of shoes to fill. It seems that Mangini will fit in well. Last time I saw DT on the Prog tour with Opeth and Bigelf, they really looked like 5 guys who couldnt wait to see the back of each other. I look forward to seeing them on their return to the UK in the Summer to witness the new line up. I hope it works out well and doesnt fall apart at the seams anytime soon 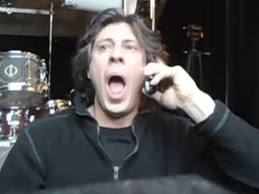 Mangini gets the news he's been waiting for !!!!