Rainbow - Down To Earth (Expanded Edition) 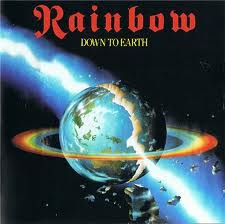 For some unknown reason the powers that be have skipped past ‘LLRNR’ and produced an expanded version of ‘Down To Earth’. Not so sure why, when there is info out on the www that suggests that there is an extra set of rough mixes and outtakes from ‘LLRNR’
At the time of coming into the recording for ‘Down To Earth’, Rainbow was basically a two piece (I make no allegations towards Blackmore’s hair stylings). It was just Blackmore and Powell (and Powell wouldn’t last much longer anyway). Gone were Daisley and Stone, and the majestic Dio had simply had enough. Blackmore wanted Dio to drop the fantasy orientated lyrics, the reply was NO! Blackmore was chasing a much wider audience ‘’we’re not giving up until America gives up and surrenders to us’’
In came Don Airey, suggested by Powell. A couple of bass players were tried out, Clive Chaiman was one, who didn’t last five minutes, the other being Jack Green formerly of The Pretty Things. Chaiman lasted a little longer but the chemistry just wasn't there. The main though issue was getting a singer. Blackmore was funding Rainbow out of his own pocket and the mobile studio was costing him $2,000 a day! They needed someone – quickly. By chance Powell played the others snippets from cassettes called ‘guess the single’, and its here where he played a track by The Marbles ‘Only One Woman’ and they wondered where this singer had gone to – that singer being Graham Bonnet
In auditioning singers the trial was ‘Mistreated’. Bonnet allegedly got the job just three syllables in! ‘’I’ve been Mis...’’ Strangely enough it was Bonnet who recommended Roger Glover for the still vacant bass role. This was the final missing piece as Glover’s writing and production was geared more towards a more commercial sound that Blackmore desperately wanted out of Rainbow.
All Night Long is a great opener, and shows off the full blown talent of Bonnets range. Even 30 yrs later he still has it! ‘Eyes of The World’ is one of Rainbows better songs – from any era of the band. Opening up with a synth intro of Holts Mars taken from The Planets, before exploding into life. ‘Both No Time To Lose’ and ‘Making love’ are both essentially fillers. I’ve heard the Russ Ballard penned ‘Since You Been Gone’ on that many compilation cd’s ( I hate record execs who think that this is the only Rainbow track worthy of a compilation ) I now cannot really listen to it anymore. Typically its one of the biggest hits Rainbow had, and Blackmore didn’t write the bugger! The second half is fairly strong with the decent ‘Loves’No Friend’, and the tour-de-force that is ‘Lost In Hollywood’
One thing that is proven with these expanded and deluxe versions, is that Blackmore either wrote with a minimum amount of tracks in mind before going to the studio, or any additional outtakes were wiped from the records – literally. As with ‘Rising’ I think they went into the studio with very few other alternate song choices. The extra disc contains B sides in the excellent ‘Weiss Heim’ (which to all intents and purposes deserved to be on ‘Down To Earth’), and ‘Bad Girl’ which is an OK song, but doesn’t set the world alight. Beside these 2 songs, you would have to be very new to Rainbow, never to have heard them before. Also there are mainly instrumental outtakes of most of the ‘Down To Earth’ tracks. The only real items of note being alternate version to ‘No Time To Lose’ (Spark Dont Mean A Fire) and ‘Loves No Friend’ (Ain’t A Lot Of Love In The Heart Of Me) which does give the listener an insight into the recording and development process that some songs go thru before coming to the finished article. The originals were rightly replaced. The final track is labelled as a Cozy Powell mix of ‘All Night Long’ and is a selfish drums mix with Bonnet barely audible. However, it provides evidence of just how good (and underrated) a drummer Powell was
Despite existing fans reservations about the direction, ‘Down To Earth’ became their best selling album. It introduced Rainbow to a much wider audience and it spurned two hit singles, and Blackmore’s desire to have his songs played on jukeboxes and radio was for all to see.
Less than 12 months after its release Powell had left, and in came a new era for Rainbow fans. Despite that, this is a fitting testament to the Bonnet fronted version of the band. After the first 3 studio albums of the Dio era, ‘Down to Earth’ still holds up well against all the others in the Rainbow catalogue.
88/100
Posted by aorwxm at 08:25