Now my little melodic rock buddies, do we have a band for you! Thanks to Avenue of Allies – who seem to be keeping AOR/West Coast music alive on their own, have unearthed a gem of a new band....Lionville!

Initiated by Stefano Lionetti (do ya see what he did there?) a singer songwriter and guitarist, and his brother Alessandro (keys), they somehow have managed to enlist a stellar ‘who’s who’ of melodic rock royalty. The key to the whole piece is Work Of Art’s Lars Säfsund, as lead vocalist. This fella is born to sing melodic rock numbers. Other (very ) notable recruits include Bruce Gaitsch (Richard Marx) who contributes an exclusive track on the album, Tommy Denander (Radioactive), Eric Mårtensson (W.E.T.), Sven Larsson (Street Talk), Arabella Vitanc (Alyson Avenue), Pierpaolo Monti and Amos Monti of Shining Line as well as other  ‘in demand’ Italian players, Andrea Maddelone and Anna Portalupi. Stefano Lionettii is a man of considerable talent, taking lead vocals on three tracks, handling a duet with Säfsund, and showing how good a composer and guitarist he really is. The album is basically like Shining Line’s great debut only with Lars Säfsund handling most of the vocal duties, and will have fans of the Shining Line and recent Work of Art’s albums salivating into their cd players. Its a musical Viagra for aor/Westcoast lovers

Opening track ‘Here By My Side’ sets out Lionville's intention directly from the off. A melodic gem, with Säfsund’s vocals layered over the music like a handsome dollop of Maple Syrup. ‘With You’ is a very Toto-esque sounding track, ‘Centre Of My Universe’ fits into is Westcoast surroundings, and is very much on the lines of Slama/Denander’s AOR project.

There’s a couple of outside contributions, the first, a Gaitsch/Marx/Sky composition ‘World Without Your Love’. The second outside contribution is the stormy ‘Thunder In Your Heart’ a track originally performed by John Farnham for the 80s movie OST ‘RAD’. Ignore Farnham’s version as this one cries out ‘80’s cracker’ and pisses all over the original. If I can offer forward one small bit of advice and that is to buy the album for one track alone, and thats ‘The Chosen Ones’ with  Arabella Vitanc and Lars Säfsund sharing the vocal duties and is a modern day classic aor track if ever I heard one.

So, with bands like Shining Line, Work Of Art, and now Lionville, the modern era of Westcoast/aor is in very safe hands indeed

If you grew up in the 80s with bands like Foreigner, Survivor, Toto, Chicago, and Richard Marx., then you don’t need me to tell you that you need this in your collection. 80s influenced music doesn’t come much better than Lionville! 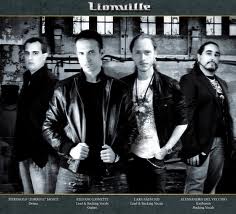