Very last minute gig this one, and was surprised to hear that the curfew was 10 O’clock. Ah well, least I’d be home relatively early for once!
I last witnessed Firewind a couple of years ago at what I thought then was a small venue, the Wolves Little Civic. I was taken aback when this current venue ‘Moho’ in Manchester was even smaller. Id at least thought that Gus G’s tenure with the great man Ozzy might have added some extra fans, even if out of curiosity, but he lucked out with that one. From what the venue lacked in size it certainly made up for it in atmosphere and intimacy. Plus the sound system was one of the best I’ve heard in such a small venue (take note – future revellers you may need earplugs to stave off the dreaded tinnitus!!)
What of the gig itself. First off, Swedish opening band Wolf was pretty awesome. I’ve only picked up on their last two albums, but after tonight I’ll make sure the rest are mine! Coming on to the ‘Twilight Zone’ they blazed their path with ‘Evil Star’ hardy stopping for breath along the way. Vocalist/guitarist Niklas Stålvind’s razor sharp vocals, backed with the ferocity of Johannes Axeman (surely not a genuine Swedish surname) whose twin guitar assault knock you for six. It is pretty much speed metal anthem after anthem and they give the crowd exactly what they a baying for (Aroooo! Hoowwl! Etc). ‘Hail Caesar’, Voodoo’, Full Moon Possession’,  and Skull Crusher’ which could easily double as Priest’s ‘Painkiller’ with  Stålvind proving a good match for a certain Mr Halford, and looks like a kid considering the band has been in existence since 95. ‘K-141 Kursk, a song about a Russian sub disaster in 2000, and the mighty ‘Speed On’ brought matters to a close way too quickly. I implore you to catch Wolf as their brand of metal deserves to be huge. If Priest can do it, why can’t Wolf as they deserve to pick up the mantle that Priest are leaving behind. I'd have liked them even more if they werent from Orebro (home of my fierecest rivals in my day job!!)
Onto the Greek God’s that are Firewind. Unfortunately Apollo Papathanasio wasn’t available for this leg of the tour due to personal reasons (15 dates) but will return for their ‘Frets Of Fury ‘ tour over in the US in October. Stepping into his shoes is Swedish singer (and I must say highly respected) Mats Leven, who has Therion and Yngwie Malmsteen on his CV and considering the short notice given, did not miss a sing beat, apart from being told to get off stage for the instrumental ‘SKG’. Also since I last witnessed Firewind in 2008 they have replace drummer Mark Cross and introduce new drummer Johan Nunez (Nightrage's drummer), and was a tight as a nut
As per my Little Civic experience, Firewind have now given me two great experiences. On both occasions, I have never ever been so close and almost very intimate to a band, and I must say they were perfect once again. Despite playing a small venue to a couple of hundred people (it should be much more I add) they play the gig as if it were MSG (no not Michael Schenker, the ‘other MSG, Madison….’). Off the agenda were any high jinks, raising guitars in the air, clapping as the band would have chinned themselves
Opening up the gig with the storming ‘The Ark Of Lies’ Gus G explodes into action, with Leven settling into this style immediately and didn’t have to win over a single fan . ‘The excellent ‘Head Up High’ follows, with a jaunt back to the beginning of their career with ‘Destination Forever’.  A brief Katsionis keyboard solo ensues before they rip into ‘Angels Forgive Me’ which gets one of the biggest cheers of the night, before upping the pace with the powerful ‘World On Fire’.
A really cool band jam ensues with Katsionis showing he can match Gus G given the chance to show off his expertise, and is a values member being so talented and adds great depth to Firewind’s live experience.Nunez and Christo add to the enjoyment holding it all together
Other live staples followed, ‘Ready To Strike’, the mega catchy ‘Mercenary Man’, ‘My Loneliness’ which gets Leven a huge cheer, leading into the fast paced and utterly superb instrumental SKG.
For the encore, there were two highlights for me, ‘Into The Fire’ and their now ‘must play at all costs, ‘’Falling To Pieces’’’, before leaving all too soon
This sort of thing should be on the school curriculum, seeing bands play live and excelling at what they do, and not today’s penchant for what passes as music being pushed onto the public with shite like X factor. Compelling stuff indeed. Catch them while you can, you will not regret a single minute of it 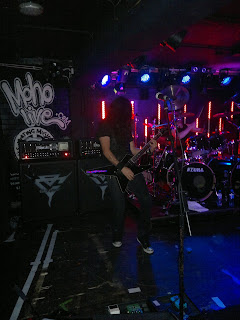 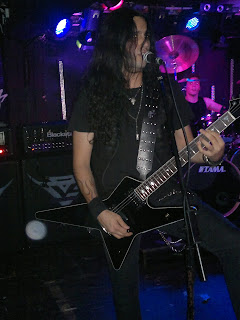 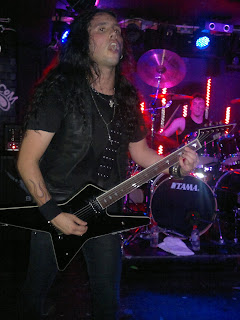 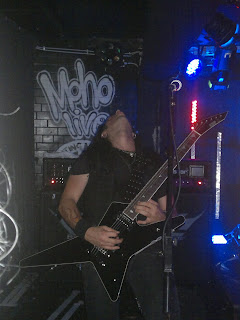 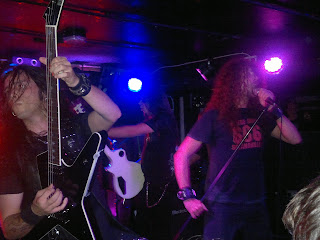