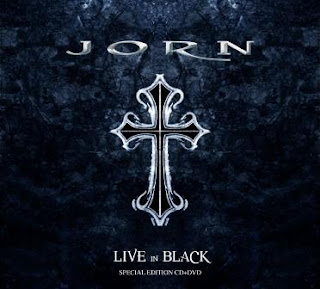 Prepare for Lande-ing
Now, as obscure references go, this one takes the biscuit. You’ve no change getting it if you’re outside the UK or under the age of 40 I suspect.  Jorn Lande is the Joe Longthorne of metal. Told ya!
Anywho, I first saw him fronting The Snakes a few years ago and nearly cried. I was witnessing David Coverdale at his finest. Roll on a couple of years, and he is a ringer for others when he wants to be. Another obscure reference…’’Tonight Matthew, I’m going to be…..Ronnie James Coverdale’’ It seems he can turn his hand to some of the best singers in the business. Surely he needs to concentrate on becoming the one and only Jorn Lande
Jorn Lande is considered as one of the leading voices in nowadays classic Hard Rock and Heavy Metal world. Often described as the “Norse God of Metal”, Jorn is certainly one of the leaders of the renaissance of classic Hard Rock on its highest level and one of the most prolific and sought-after singers of today, whose immense vocal talent has reserved him a status of a living legend to be counted amongst the greatest giants in the history of rock. Giant? He is a big bloke! This is quite true, as a true giant the man has actually shifted over 2 million albums and he is one of the best metal vocalists plying his trade today

Jorn Lande became widely known in the Hard Rock / Metal community singing for such bands as Millenium, Ark and finally Masterplan, the band featuring former Helloween guitar player Roland Grapow. He also guested on several projects such as the Allen Lande albums (with Symphony X singer Russell Allen), Avantasia, Beyond Twilight and Brazen Abbot. However he also has his own band project JORN, who debuted with in the year 2000 and with whom he has released 8 successful studio albums so far and is the undisputed heavyweight king of the cover version
I cant say that live albums are my favourites, as the best have always been rumoured to be more studio than live versions, and, given the opportunity I would always opt for a live gig over a live album.
On first inspection it seems that john and his merry Nordic minstrels are as tight as a nut.Recorded two weeks prior to Lande’s appearance with Heaven & Hell, Live in Black was captured on video and audio at the Sweden Rock Festival in Solvesborg. In front of 20,000 crazed metal fans, Jorn Lande and his current band lineup, comprising guitarists Tore Moren and Tor Erik Myhre, bassist Nic Angileri and drummer Willy Bendiksen, delivered 14 songs that were taken from his rather extensive back catalogue. Just to date his set even further he has gone with the classic rock school of solo’s - by Tore Moren and Tor Erik Myhre and a drum solo from Willy Bendiksen. Surely a name even Steel Panther are jealous they didn’t think up
With the vast number of songs he can pick from, Jorn could never please everyone, but rest assured his ‘bread and butter’ tracks are included – ‘Tungur Knivur’ and ‘We Brought The Angels Down’. The man’s love for Dio is there for all to see, and thankfully he doesn’t fall on the side of parody. The man can let rip with the best of them and his extensive vocal dexterity is matched by the searing guitar play of Moren and Myhre. These two tear the place up, and really add colour and depth and add a certain amount of welly to some already decent songs
There’s little interplay with the audience between the songs but that makes for more top quality singing; growling and fierce one moment, almost operatic the next (give that man the ‘Go Compare’ ad.) . ‘Spirit Black’ sails so close to being a Dio’s ‘Straight Thru The Heart’ track its untrue.  I can’t say that all the soloing is relevant in this modern era, but with Lande’s feet firmly planted in 1986, its 100% relevant. Both Myrhe and Moren’s solo’s are slightly different as it’s a decent band jam with a bit more substance than your usual guitar wankery.
Very surprisingly, there is only one cover that’s included, and I’d never have guessed he’s have gone for Lizzy’s ‘Are You Ready’ which is another great tribute to the great Phil Lynott.
‘War Of The World’ segue’s nicely into a passage from ‘Man On The Silver Mountain’, in tribute to the great man himself and carries it off impeccably. A man in which Lande is keen to emulate now there is a huge gap in the Metal God market place. The whoa-oh-oh-ing from the crowd reminds me also of Maidens ‘Fear Of The Dark’.
Production values are excellent, nothing is lost in the mix, and without the audience participation, (he’s that good), it almost seems like a studio album.
I’ve heard some people class Jorn Lande as being a bit of a Spinal Tap version of Spinal Tap. But, given a decent song, and a voice like that, the man proves he has a special talent indeed
All in all it sounded a great night. Me?  I’d buy it for the DVD and the extras alone! 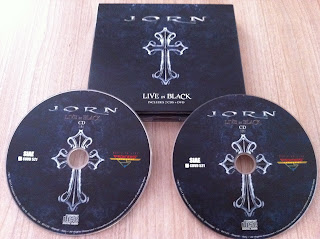 Label – Frontiers
CD 1: Road of the Cross, Shadow People, Below, We Brought The Angels Down, Stormcrow, Spirit Black, The Inner Road, Man of the Dark.