Seks - Harder Than You 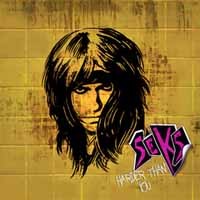 My cat is harder than you! Harder, because our beloved Smudge died a few weeks ago.
Bollocks! Looking at the blarb that accompanies these cds, a picture paints a thousand words, and the few hundred words that also came with the cd didn’t make for promising reading (or listening either I might add)
One of the albums Ive listened to this year that didn’t fill me with happiness and that was Julian Angels Beautiful Beast. Not only does this remind me of JABB, the fucker is also involved on this album, playing guitar on almost every track. Not content with ruining his own career, Angel also likes to take others down with him. Mind you, Seks don’t exactly need a great deal of help in this department
Seks was formed on 2009 by Rock Hart ( he,he very funny! Not!), as a dream - I would say nightmare - to revive the Heavy Metal genre. In a world dominated by pop and hip-hop/RnB, Hart wanted to remind the public on what they were missing out of. After a brief 6 months living in LA he moved to Norway to look for candidates to make the idea of Seks a reality. He thought of no better place than Norway to form a band in is own eyes. I read it like this, Hart moves to Oslo after 6 months as the bloke hasn’t got a cat in Hell's chance of making the grade in LA. What with Scandinavia being overrun with 80's style metal (its part of the school curriculum that you form an 80s hair metal band), he found his calling, and band mates - Savage Thrilla (drums), Gash A Lean (Guitar), and Tad (bass). Unfortunately for us they kept going and went on the prowl for a worthy guitarist, and found one who has the balls to stand up to his mates in keeping his God given name, Charles McMillin.
Basically 'Harder Than You' borders on shite, with poor songwriting thrown in for good measure - e.g. ''Throw me all around, Fuck me on the ground'' and even poorer singing. Heck, Hart isn’t the best singer in the world, I even have my doubts if he is the best singer in the band! This severely hampers the bands future from progressing beyond a debut album
Musically its decent enough, but Harts lack of range pisses me off immensely. The songs which give the most promise are 'On The Inside' and 'Royal Nights', but would still struggle to make most bands albums I've heard in 2011
If glam is your thing then you’ve probably come to the right place. For most of us out there….run… and don’t look back!
30/100
Posted by aorwxm at 17:54