Well I never in a million years thought I would ever get to see Mr Big playing live, not only in the UK, but also in a relatively small and intimate MA2, twenty feet away from the band! Thanks to this resurgence in melodic rock over the last year that has made this feat happen for fans over in Blighty. In 2009 Mr Big, after some huge musical/personality differences, buried the hatchet/s and reformed to great surprise (of many), but still proved they all had the chops as they released the excellent and aptly titled ‘What If?’ earlier this year.
I wasn’t expecting the venue to be full, especially with tickets priced at £30 plus no support act. Thankfully this meant that Mr Big played a decent set at 2hours and twenty minutes, and to be honest, played the gig as if they were playing Madison Square Garden back in the 80s. Hell, they even looked extremely thankful and enthusiastic to be playing in front of a very appreciative audience.
Mr Big kick off with the high octane ‘Daddy, Brother, Lover, Little Boy’ and they have audience in the palm of their hands right from the off, with Sheehan and Gilbert trading licks, Martin looking (and sounding) as youthful as ever, and Mr Pat Torpey taking it all in his stride, tying it all together – no fancy tricks, he is the glue holding the whole thing together. The screams just getting louder with every passing song – ‘Alive and Kicking’, ‘Green Tinted Sixties Mind’,  with ‘Undertow’ and ‘American Beauty’ getting an early airing from the new album. ‘Take Cover’ followed, before a rousing rendition of ‘Just Take My Heart’.
‘One Upon A Time’ followed, but for the previous song Mr Cool (Torpey) made a rare mistake and played the intro to this song,  which came complete with a side order of piss taking from the band.
Next came a stunning piece of vocal dexterity from Torpey/Sheehan/Gilbert (man these fuckers can all REALLY sing!) before letting rip into ‘ A Little Too Loose’. No doubt the three add to the whole vocal experience adding in where (on a few occasions) Martin struggles with the higher sections on what is a demanding and long set. The same can be said of ‘Road To Ruin’ where the harmonies from all four were just fantastic.
Gilbert stepped to the front , stopped listening to his mp3 player, took off the defenders, and blazed into his guitar solo. Up came ‘Still Aint Enough For Me’ and ‘The Price You Gotta Pay’ complete with a Gilbert Sheehan jam, and a sing-a-long with Martin, who if he ever decides to leave the profession, then the guy has the calling to be a preacher. We all were lucked up by singing his ‘mucca-lucca-heini-hi’ verse, before going back to the first Mr Big album with ‘Take A Walk’.
Even more Gilbert/Sheehan interplay followed before ‘Round The World. If I have one slight gripe with the whole evening (don’t shout at me) was with Sheehan’s bass solo. Yes I totally agree that he is one of THE best bass players in the business (I wish I’d have caught him playing in Roth’s band in the 80s) but for me the five minute solo was four and a half minutes too long. Sorry! At least it led into the utterly excellent ‘Addicted To That Rush’.
After two hours they left the stage for a few seconds before returning with their mega-hit ‘To Be With You’ This is one of the few instances where I thought Martin’s vocals struggled to hit some of the notes, who am I to judge after his wonderful singing for the last two hours? The fierce ‘Colorado Bulldog’ followed, before what was to come next….
If there was a event in the 2012 Olympics for ‘Best Band/Best Musicians’ then Mr Big would certainly be in contention. Not only do they reign supreme in their own instrument of choice, but the talented bastards also switch around for Deep Purple’s ‘Smoke On The Water’ playing each other’s instruments – Torpey bass/ then vocals, Martin - lead guitar / then bass, Sheehan – lead guitar / then vocals, with Gilbert just tying all together for the whole song impeccably sat at the drum stool.
Finally the last song was here, with The Who’s Baba O’Reilly, before taking the applause from a very appreciative Manchester audience. I even think the bloke next to me was crying.
A great night, played by a great band, with a great audience in tow. Just don’t leave it so long in coming back next time guys. 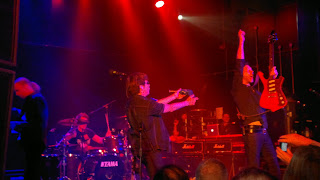 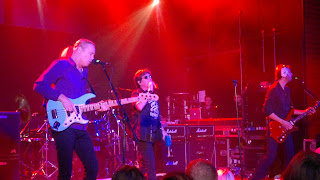 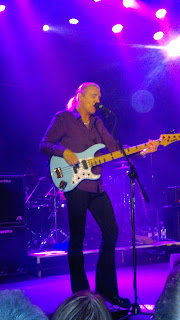 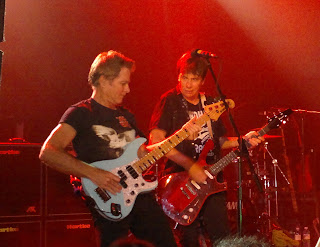