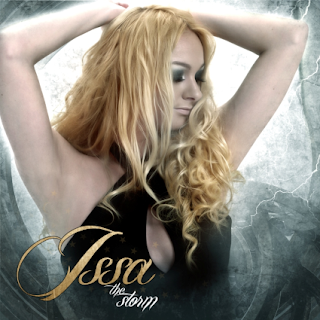 Issa Oversveen anyone? ….Anyone? To most people in the rock listening fraternity, Issa Oversveen is a name many of you haven’t even heard of previously. Well, shame on you, shame of the whole Goddamn lot of you!
But to us people on the periphery in the land of Melodic Rock,( If the whole of the UK was tuned into all forms of Metal, the AOR community lives on Bardsey island) Issa is seen as a beacon in a sea of mediocrity (but, I must say that 2011 is proving to be a storming year for AOR/Melodic Rock).
If you are already aware of her stunning debut ‘Sign Of Angels’ you’ll know the quality of voice and melody that this lady possesses. If you are looking for ‘Sign Of Angels II’ then you may be disappointed. This time the pomp and ‘in your face’ attitude of the debut is missing somewhat, but please do not let this put you off. In ‘The Storm’ there’s a bit more subtlety coming into play. There are no immediate grabbers like ‘Angels Crying’ or ‘I’m Alive’, instead it’s more of a slow burner and after the first listen you may wonder why it’s a little understated, nay, dare I say underwhelming.
Whereas Issa was a pouty, and firey lioness on the debut, here she is more of a vulnerable kitten. She has been compared to such music stars as Celine Dion, Avril Lavigne and Amy Lee, but with ‘The Storm’ she proves she has more of a style of Miss Benatar letting the finesse of the song make its mark rather than a throat grabbing hook.
As with the debut the production quality is top notch. Not metal and certainly not easy listening Pop, Issa’s music has everything and more to appeal to the vast masses: real rock with a commercial sheen.
Unlike the debut self-titled album, the new album shows has her taking a shot at songwriting and together with the Martin brothers (Vega, House of Lords, Khymera, Sunstorm), she offers up tracks on the new album like “Invincible”, “We’re on Fire” and “The Storm”, the album’s title track. Contributions also come from Robert Sall (Work of Art), Randy Goodrum (Steve Lukather, Toto, Steve Perry), Daniel Palmqvist, Johannes Stole (Xorigin), Daniel Flores, Sören Kronqvist (Crash the System, Sunstorm), Chris Laney, Magnus Karlsson (Place Vendome).
Opening track ‘Looking For Love’ kicks off proceedings nicely in that well polished Scandinavian AOR vibe. Not as ass kicking as the debut, it still packs a punch. The intensity level never really rises above the opener, but despite my desire to want a little more welly, the pace never drops and her vocal style is warm and sensual. ‘Take A Stand’ has a bit of a Within Temptation riff about it, and borders on pop, but its all good stuff. ‘Invincible’ is a big ballad, as is ‘Too Late For Love’.
All in all ‘The Storm’ proves to be a more mature offering than the debut. The lack of punchy tunes may put some off, but for those prepared to give this a few listens, then you will be rewarded with an album full of maturity and quality
80/100
Frontiers
Tracklisting: Looking For Love; Please Hold On; Take A Stand; Invincible; Two Hearts; Black Clouds; You're Making Me; Gonna Stand By You; We’re On Fire; Too Late For Love; What Does It Take; The Storm.
Posted by aorwxm at 09:23