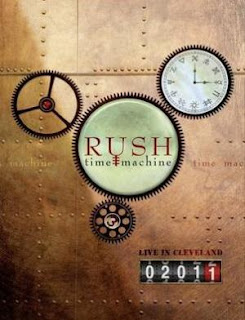 FACT: Rush has sold more than 40 million records worldwide.
DOUBLE FACT: According to the RIAA, Rush’s sales stats place them third after The Beatles and The Rolling Stones for the most consecutive gold or Platinum studio albums by a rock band. All this, and they never have to call themselves ‘The’ Rush to do it.
It was all captured in April at Cleveland’s Quicken Loans (an utter shite stadium sponsor name if ever I heard it), and it mark’s the bands first live concert to be filmed in the US of A. The choice of city being a deliberate nod of gratitude to the first city to support Rush on its airwaves.
‘Time Machine 2011: Live In Cleveland’ is the band's 7th (I think) live album release, and are probably the most prolific live album exponents of the last 30+ years. The Time Machine DVD is the 5th live DVD release in the last 8 years, 6 if you include the live compilation ‘Working Man’. Now I’m not complaining, far from it in fact  I totally love this band, and each live release gives the avid Rush fan something different. In this case, they had fans queuing up in their droves to see the entirety of Moving Pictures being played out before our balding heads (and eyes). Well those who could afford to buy a ticket (mine cost me £70 a piece). If you couldn't attend the shows then the DVD is the next best thing
Also present if you caught the shows are the concept tour videos, ‘’The ‘Real’ History of Rush ‘Don’t Be Rash’, Episode No.2’’, and the opening video to the second set ‘’The ‘Real’ History of Rush’’’and Rock ‘N Roll is My Name, Episode No. 17’’ and I tell ya, the price of the dvd is worth shelling out for, just for these two alone. If you haven’t seen them I wont spoil the fun. The bonus material includes outtakes from the two short videos (and proves that Alex Lifeson could have made it as a comedian if the music career had never have taken off!), an alternate film version video for ‘Tom Sawyer’, and two rare pieces of live footage – ‘Need Some Love’ from Laura Second Secondary School, and ‘Anthem’ from Passaic New Jersey in good ‘ol black & white.
So what of the quality on offer. The dvds filming goes to Banger Films again ( who also did the excellent Beyond The Lighted Stage, and Rush’s mate Richard Chycki proves his worth yet again with a mighty fine mix). The sound is utterly awesome, especially if you have an external decoder. The DTS soundtrack will just melt your sofa.
Musically, Rush have probably gotten better over the years. Sonically Lee’s voice is nowhere near the 2112 wail he once had, but hey, I still wish I had his range now, and certain songs really still continue to ‘pop!’ Rush hit the ground running with ‘The Spirit of Radio’. The Moving Pictures segment lives up to expectations: Longtime live staples “Red Barchetta”, “Limelight”, and “Tom Sawyer” are paired with “The Camera Eye”, “Vital Signs”, and “Witch Hunt”, three tracks far less familiar to the concert stage. What’s remarkable about the songs are how well they have aged. Guitarist Alex Lifeson even dons period clothing for the segment!  The two tracks from 2012’s Clockwork Angels appear (Caravan & BU2B), and prove that they have not lost their rocking touch. Whilst good, they struggle to hold their ground against the staple bethemoths such as ‘Closer To The Heart’, ‘2112’, ‘Marathon’, and my personal fave ‘ Subdivisions’.
Peart performs his solo masterpiece and is probably only one of a small handful of drummers that can still hold an audience in the palm of his hands for a drum solo, it all proves that even after all these years, he is still improving and excelling. He is still the master of the skins. ‘2112/The temples of Syrinx’ pretty much top off the evening, and the encore is awesome, with he magnificent ‘ La Villa Strangiato’ and ‘Working Man’
All in all its probably the best live compilation of Rush’s that will ever produce or perform. To top it all off there are even women in the audience. Boys it only took you 35years, you’ve finally cracked it
Live bands don't come any better than this. Oh Boy! Sausage Time anyone???
90/100
Posted by aorwxm at 21:20