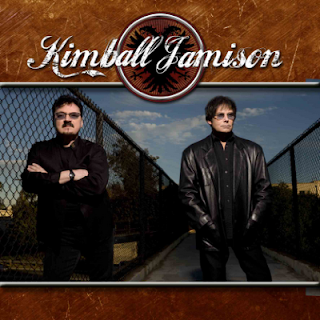 To be totally honest with you, I just don’t know! Despite recent sterling efforts from the likes of Lionville, Toby Hitchclock and a few others this year, the concept of a ‘project’ album is a strange one indeed. Usually it’s the whim of the record label boss (in this case the powerful Serafino Perugino – who obviously LOVES his melodic rock) who then brings in a bunch of hugely talented musicians and writers to work around a star, in this case its two of them – Jimi Jamison (ex Cobra & Survivor) and Bobby Kimball (ex Toto). See what I mean - Richard Page (Mr Mister), Jim Peterik (Survivor), Randy Goodrum (Steve Perry, Toto), John Waite, Erik Martensson (W.E.T.) and Robert Sall (Work of Art), among others, and directed by the expert hands of German producer Mat Sinner. All I will say on the material is that this combination of players and writers has paid off in huge dividends!
Now I don’t begrudge anyone the chance to earn a few bob, but these ‘projects’ have little chance of being turned into viable tours for us AOR lovin’ fans. But - I am very happy to get two giants together and hear the resultant forces that they both bring to the table
The chances for a cataclysmic opposition of personalities is a huge one. Bur Messrs Kimball and Jamison are not only good friends they have been around the block on more than one occasion to let any friction get in the way of a good opportunity. For the first time in their career, Bobby and Jimi have joined forces together in a “duets” album, which features their signature vocal style in a familiar musical environment. Musically the direction is naturally and intentionally driven towards the pomp that both Survivor and Toto excelled at and became household names upon (well they are household names at my place).
Opening track ‘Worth Fighting For’ encompasses everything that ‘To-vivor’ stood for, catchy choruses, great hooks,  all tied together with a big dollop of POMPUS MAXIMUS. None more so than the likes of ‘Chasing Euphoria’, ‘Hearts Beat Again’ and ‘I Did Everything Wrong’. These four tracks alone justify Signore Perugino’s desire for this collusion. Both Kimball’s and Jamison’s voices are still in excellent shape, and play off each other perfectly. It could have easily gone a bit ‘tit’s up’ if one had more ‘oomph’ than the other, thankfully both are in fine fettle and have the desire (and the money that Frontiers will thrust upon them) to do it a second time in the future
I just don’t know how many more times these ‘projects’ can keep being thrown at us. It will only take one or two poorly received albums to put the brakes on. No doubt Frontiers have a few more up their sleeves
Obviously it’s for fans of Toto and Survivor, but any melodic rock fan should enjoy the interplay and quality on offer from these two giants
80/100

Tracklisting: Worth Fighting For; Can't Wait For Love; Sail Away; Chasing Euphoria; Find Another Way; Get Back In The Game; I Did Everything Wrong; Shadows Of Love; Hearts Beat Again; We Gotta Believe; Kicking And Screaming; Your Photograph.

PRODUCED BY : Mat Sinner, co-produced by Jimmy Kresic
Posted by aorwxm at 10:15