The venue (Railway, Bolton) was small (2x the size of my lounge) , hot (very) and crowded (again, very). Put it this way, if Carlsberg did home concerts, then the Railway nailed it. It was like playing a gig in your living room – stage where the telly was, carpets, curtains, and 150-200 of your closest friends. Close, as you had to mingle with other people's odour and bodily fluids! This isn't a criticism by the way, The Railway was a venue and a half! In fact, they would put other bigger venues to shame (sound, lasers - they even broadcast the gig to other rooms in the pub if you are not in the main room - very nice!). Also they have a superb video jukebox playing all your faves from the last 30-odd years! I wish we had one in Wrexham!!!

The acts on offer were White Widdow (Australia) - now that takes some commitment to get guys over for a handful of intimate gigs, Serpentine (Wales & Yorks), and Ten (Lancs) headlining in the UK for the first time in years. Billed on the poster 'for fans of Whitesnake, Journey, Foreigner & Toto' and the like. They couldn’t have been more spot on! 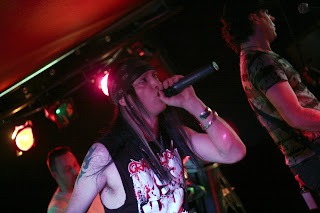 White Widdow was up first. Breaking in their new virgin drummer (George Kristy), it was only his 4th ever gig, and it was if the band was a settled formation for years. Unfortunately though, singer Jules Millis' was suffering, at least he had the decency to apologise for the state of it (probably the state of the decent weather/humidity/beer!). Despite this affliction, they still delivered a sterling set of AOR classics - with feet firmly planted in the 80's - it won’t be the first time I say this about tonight - WW delivered a set of AOR quality. Despite the vocal issues, WW delivered on all levels.

A change from the Sat eve Nottingham gig whereby WW headlined, on the basis of tonight the running order was truly justified. These guys (Serpentine) should have no right playing old school AOR in the 21st Century. AOR wasn’t even popular when its popularity was at its highest in the 80s so why bother now? Why? Because you can’t beat a bit of class and melody, and tonight’s audience proved that if the line up is correct, fans will turn up to watch quality. 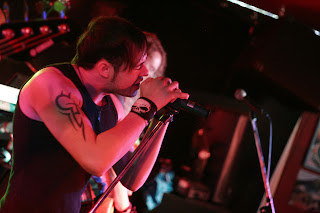 With regards to the young whippersnappers that are Serpentine, one would normally expect them to travel the country in the back of a Ford Transit, and I somewhat expect that this mode of transport has been ditched for a DeLorean as Serpentine wear their AOR 1980's badges well and truly out in the open. Singer Matt Black has some big Tony Mills size shoes to fill, but you know what, he's stepped into these songs like a comfy pair of slippers and slayed the Mills beast. Even better, he fits the Serpentine songs like a glove and I feel that the songs sound even better now than originally recorded. Smooth Toto-esque numbers like Lonely Nights just oozed class. The setlist was weighted towards LADIHD, and rightly so. For me Serpentine would take some eclipsing and are one of the best melodic rock bands Ive witnessed in some time. These guys can carry the melodic torch for many a year to come 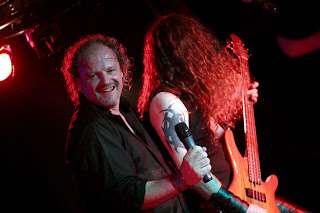 Onto the headliners for the evening, Ten seemed to be the melodic rock bearers in the 90s when no one else really give a shit about AOR. It’s a mere ten years since Hughes and his Ten minstrels last made a go of a UK tour. They have been sorely missed. Hughes was out to peddle songs from the latest CD in the main (Stormwarning),in particular the very pop and commercial oriented ‘ The Hourglass and the Landslide’, and the excellent opener ‘Endless Symphony’. Hughes also promised to delve throughout the classics right back to their beginnings. ‘Ten Fathoms Deep, After The Love Has Gone, The Robe and Name of The Rose’ were all given a well aired outing. Gary Hughes’ voice hasn’t got the widest register in the world, but what he lacks in range me more than makes up for in quality of songwriting and substance. Backed by an excellent bunch, Yates, Mitchell, McKenna, Treece-Birch, and long standing guitarist Halliwell, all delivered in spades and were as polished as Gary Glitters bedroom telescope. For fans due to see them headlining the Friday Firefest, Ten will be a sight to behold I’m sure

If it were a boxing match, I think Serpentine just shaded it on a points decision.

Extreme credit to all concerned, this tour is one of the best VFM gigs you’ll see all year. Catch them on the remaining dates in Birmingham and Ponty before the end of this week
Posted by aorwxm at 20:46