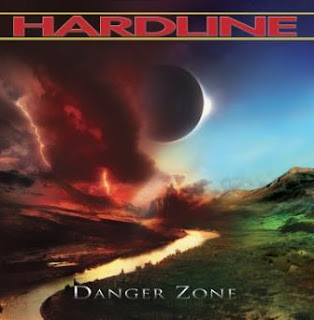 Hardline was formed when brothers Johnny (vocals) and Joey (guitar) Gioeli, originally from the band Brunette, teamed up with Journey/Bad English guitarist Neal Schon. The original plan was for Neal to produce Hardline, but as he was having so much fun that he decided to join the band as soon as he left Bad English.

They immediately added established musicians Todd Jensen (David Lee Roth, Alice Cooper) on bass and Deen Castronovo (also coming from Bad English) on drums to the mix and the result was magnificent. They went on to record their debut album “Double Eclipse” for MCA in 1992 and then went on the tour circuit with such heavy hitters as Van Halen and Mr. Big.

While it became apparent after the release of the third album that the band would risk again to go into hibernation, it was thanks to the persistence of the band’s #1 fan, Frontiers Records President Serafino Perugino that Gioeli decided to give Hardline another go. That happened when he heard the songs that the Italian songwriter and producer Alessandro Del Vecchio (Edge of Forever) started to write for him. Surprised and excited with the quality of the music, Hardline  has now turned to a different beast and with a European based line-up featuring Francesco Iovino (UDO), Thorsten Koehne (Code Of Perfection, Eden's Curse) and Anna Portalupi (Mitch Malloy)

Well one thing is certain. In today's current musical climate, being a guitarist or a drummer simple doesn’t cut the mustard. You have to me a multi-instrumentalist at least, and it helps even more of the said Multi-instramentalist can sing, write and probably produce and knob twiddle as well! Its pretty much happening in the 2012 version of Hardline. ( Is it 20 yrs since the cracking debut was let loose?)

Anyway I digress. On board this time is one of the hardest working blokes in rock music, and he seems to be popping up in almost every review I’m writing recently, Alessandro Del Veccio – Keyboardist / writer / producer / vocal teacher / and pretty decent singer in his own right.  He probably designs his own range of Italian clothing

The only issue I have with this, is that some of the albums doing the rounds, and no doubt a few more over the next few months, are all having the same sound. If you like your melodic rock as polished as Gary Glitters bedroom telescope, then look no further. The same could be said of a lot of European melodic rock/metal at this present time. Check out the likes of Edens Curse, etc and you'll see what I'm getting at.

Thankfully though its not all negative news, the new Hardline album is actually very good indeed. The best on offer since the excellent debut. Opening track (and best song on the album) ‘Fever Dreams’ has all the hallmarks of a great melodic rock song and would easily be a contender for  Double Eclipse had it been written 20 years ago. Thanks to the new team and Gioeli’s trademark vocals Danger Zone hits the road running at 100mph.

Title track ‘Danger Zone’ is darker and heavier than you’d expect from a Hardline song, and it this isn’t your cup of tea then there’s more melodic fluffiness just around the corner. What Id Like brings it all back on track, with a decent hook and chorus, and Gioeli's off flying again.

The best efforts here (after the opener) consist of the ballad ‘Stronger than Me’, ‘Never Too Late For Love’, and ‘Stay’

As expected I cannot fault the production here one little bit. Its from the ADV school of knob twiddling, and is consistent and high quality. If only the same could be said of the songs on offer. Don’t get me wrong, it’s a good Hardline album, its just not a great one

Tracklisting: Fever Dreams; 10.000 Reasons; Danger Zone; What I'd Like; Stronger Than Me; Never Too Late For Love; Stay; I Don't Want To Breakaway; Look At You Now; Please Have Faith In Me; Show Me Your Love; The Only One.
Johnny Gioeli – vocals
Alessandro Del Vecchio - keyboards and backing vocals
Thorsten Koehne - guitars
Anna Portalupi - bass
Francesco Jovino - drums
Posted by aorwxm at 08:35