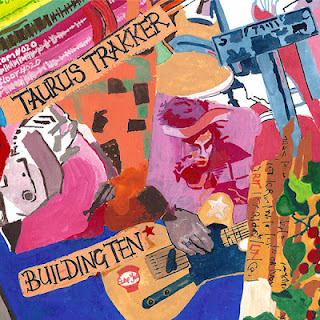 Many will claim that The Clash inspired them to pick up the guitar (me? I rather name drop Ritchie Blackmore, but that’s just me I suppose!), but few can say that they caught Joe Strummers sminal punks at such close quarters as Taurus Trakkers Martin Muscatt. You see. Muscatt is Mick Jones’ younger cousin, and MT got to witness than man himself of some of the early shows played by the man he calls, ‘’the most intense and passionate band ever’’. Brave move, I can see his point that The Clash were a very important band in British music (and their legacy to the World even). But me Im more of a Classic Rock/NWOBHM kind of bloke

Ive not heard the debut, but someone obviously liked what he did and he is back with the dreaded sopohomore album, ‘Building Ten’.  Taurus Trakker are basically a two piece with Martin Muscatt handling chief duties, songwriting, guitar, vocals; and Allison Phillips, on drums and BVs. Others drop in and out, Mick Jones plays a part on the title track.

Ive always made it quite clear that I like my singers to actually sing. For me Muscatt does the opposite, its your typical Cockney vocal, sort of ‘Chas and Dave’ only with a bit more of an edge. Musically the blokes spot on and they definitely have something here, a blues style which I really like, but unfortunately vocally his style leaves me very cold indeed, even writing this on what is the hottest day of the year so far in 2012. Perhaps it’s the heat that makes me miserable and unable to fixate on the blokes vocal talents. I'm not a huge fan, but what Taurus Trakker do, they do very well indeed, think Black Crowes (only without Chris Robinson Singing) and replace with Gary Holton (R.I.P.), and early Stones, and then you're not far off the mark

TT write ‘proper’ songs. One of which should be adopted by my local supermarket, lovingly entitled ‘ Bag for Life’. Surely this should have been ‘Bags!’ I myself have enough to last thru my great grandkid's lives as well. One thing I do like is Krysten Cummings’ background vocals, who adds a good dollop of class to those 5 songs that she contributes to. Let her sing one next time Martin!

The punk driven songs I could do without (Title Track) but songs like the light hearted Bag for Life, (very catchy indeed), and the more classic blues driven songs  (Young Mans Trouble, Gamblin' Blues) are much better on my ears

Without being too critical, the music is ‘sahnd as a fackin pahnd’ but vocally its just not me. Despite my gripe I will base the review on more on the music