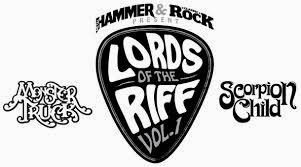 Lords of The Riff Tour turns out to be the most aptly named tour since T.Y.R.s "Where the fuck are we tour'.

The event was the last night of the UK tour held at Manchester's Roadhouse venue - not the best venue in the world. Fuck, its probably not the best venue in the street! It was completely oversold, with 275 in the venue, (capacity 250 max!), however, it's still a great place to get as close to your idols as you could possibly imagine. Only trouble is, unless you're in the first couple of rows, basically you're going to see four fiths of fuck-all!

Buffalo Summer came on to a small-ish crowd. These Zep influenced Welsh young guns have grown in stature since last years HRH AOR appearance. They dress as if they are in the 70s (my guess is that this is how its like in S Wales as its 30yrs behind the fashions in the north part of Cambria)
They play with the verve and vigour of a band wanting to grab you by the balls (and other lady parts) and make you listen. With songs such as 'Down To The River', 'A Horse Called Freedom', and new ones like 'Money', then its surely a matter of time before these guys are playing to much bigger audiences. Bring on album No.2!

Monster Truck and Scorpion Child have been taking turns as to who finish the shows. Second on were The Truck. Having made the sound-check the last just went straight into album opener "old Train" with singer/bassist Jon Harvey looking like Blackfoot's Charley Hargrett (in his hey-day), and sounding like the bastard love child of Joe Cocker and James Brown! Nice!

Guitarist Jeremy Wiederman hops and jumps around the stage like a tazmanian devil, and the combined thunder of Harvey's bass, Steve Kiely's frantic drumming, and Brandon Bliss' organ (f'narr!), means that the energy given off could power their own amplification. A mix of their EP and 'Furiosity', the oustanding highlights were 'The Lion', 'Old Train', 'My Love is True', and the totally awesome 'For The Sun', a song that reminds me of Blackmore/Dio in their 70s magnificence.

Scorpion Child were a man down, but two in reality, due to the recent departure of a drummer and rhythm guitarist, but it did not detract one iota.

I mean this with no disrespect to Scorpion Child, but the audience seemed to thin out after Monster Truck. Well, shame on them! Where MT seem more of a man's band, I think a few of the lovely ladies were there solely for SC front man Aryn Jonathan Black. I think he dropped something just before he came on stage and it wasn't his keys! It's easy to point the Led Zep finger at SC and Black, but they still have enough in their locker to dispel this comparison.

I sense I bit of dress style going on; all had great shoes, and what looked like really comfortable trousers. Think Farah for the rock generation, that only a 47 yr old like me would notice! Black was doing a double denim look, but jacket and waistcoat, and looked all the rock star he was.

There was no warming up here folks, just....BOOM! In yer face right from the off. Scorpion Child have the swagger and confidence in their live shows that bands with 30 years of experience fail to muster up! Bassist Shaun Avants just strutted like a peacock with a bass, and what with Blacks interaction with the crowd, and stage presence, new drummer, Jon Rice's Muppet Animal style and Christopher Jay Cowarts lead guitar, I truly din not know who to keep my eyes on as it was all compelling. 'Kings Highway', 'Polygon Of Eyes' and 'Antioch' had the crowd buzzing.

Undoubtedly, Monster Truck definitely have the songs, but fuck me, Scorpion Child have the stage presence.

After a show like tonight, all I can say is that the SC album does not do this band justice. A decent album but a frigging lightning bolt-jolt of a gig from the Texans. I came as a fan mainly of The Truck, but also left with a place in my heart for Scorpion Child.

Where their/my T-shirt states 'Don't fuck with the truck' I urge the people at CR/MH not to fuck with this tour either. Bring it back later in the year, same bands, but bigger and better venues. You cant fuck with perfection!!

THE BEST FUN YOU CAN HAVE FOR A TENNER WITHOUT TAKING YOUR CLOTHES OFF.....FACT!!!!
Posted by aorwxm at 13:26