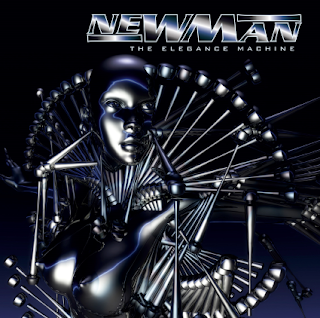 Now, for some reason unbeknownst to me, I never really got into Mr Newman (F’narr) or the band Newman. A small oversight on my part which was rectified a few years back writing for another website whereby an actual CD fell thru the letterbox and I was completely transfixed. It wasn’t a Newman album per se, but a quite cracking side project with Mark Thompson-Smith called 'Big Life'. I managed to catch part of them (Newman) live at the ill-fated Z Roxx fest a couple of years ago. My points of Newman reference are as about as obscure and as rare as rocking horse shit. I apologise to Mr Newman for this glaring omission in my record collection. Fast rewind a couple of years back and ‘Siren’ was one of my fave albums of that year.

Back to the present and Newman have blown me away (again!) with this new album, 'The Elegance Machine'. Albums nowadays are recorded on a Trevor Eve (Shoestring!), but Steve has the knack of turning out these albums on a big production scale that big record companies would struggle to replicate. Not only that, the bloke knows how to get a striking album cover drawn up that looks like its been completed way beyond its budget.

Steve has gone for the ‘if it aint broke’ skool of rock – Rob McEwen (drummer for the last 8 Newman albums returns), and brings in a couple of mates, Mark Thompson-Smith of afore-mentioned 'Big Life' who contributed BVs to  ‘Illuminate’, ‘Send Us Salvation’ and ‘Pretender Surrender’; and Geoff Wootton for BVs on ‘The Suit’, ‘One Good Reason’, and ‘Halo’.

If anything, 'The Elegance Machine' builds on Siren and is a more hard-edged affair, and that is certainly a big plus. Opener, ‘The Suit (Skyscraper)’ comes out of the starting blocks quicker than Usain Bolt after a dodgy curry. Once past the irritable synth opening, title track 'The Elegance Machine' puts Newman back on the rails with its Newman (™) pulsating riff, sonic backing vocals, and instantly sing-along chorus. It’s the type of riff that Whitesnake have been looking for the last 10 years. ‘Don’t Stay Lonely’ has a Journey-esque chorus, and wears its 80s influence firmly and proudly on its sleeve. You can’t sing the words ‘Don’t Stay Lonely without thinking Steve Perry!

Steve goes into the loft for one his bezzie mates (Mark Thompson-Smith), dusts him down, sticks him on charge and lets him loose on the fast paced rocker, with ‘Illuminate’ being the pick of the 3 that MT-S appears on. ‘Confess' is standard fare, but even Newman’s standard is still better than some other bands can muster. 'Halo', in contrast is like a kick to the nuts in comparison, and Geoff Wootton is brought in for some BVs. It will bring comparisons to U2 as the tone is very ‘The Edge’ (why the fuck Mr & Mrs. Edge called him ‘The’ is beyond me!). It will surely be a staple in the live set, due to its uplifting and crowd participant chorus. ‘Prayer For Apollo’ is what it says, a space themed track about Apollo 13. Steve’s not one to generally go for the ‘cock-rock’ school of songwriting, he’s far too intelligent a writer. This is shown on ‘She Walks In Silence’, a song about domestic violence.

Such is his output; both Steve and the band that bears his name should be a household name. I know he is in certain homes (especially a Spurs loving one in S.Wales), but nowhere near enough.

All I can say is that existing Newman fans will be salivating at this, and if there’s any justice, he should pick up a new set of devotees along the way.

YOU CAN PRE ORDER THE ALBUM HERE - www.newmansound.com

Newman is (for this release)