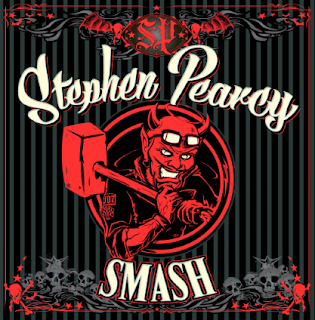 After the disappointment of Jack Russell’s Great White, I’m hoping that Stephen Pearcy fares better. I think (in the distance, somewhere near Milan) I can hear the bottom of barrels being scraped….

Best known as the original vocalist and founding member of the platinum rock band RATT, Stephen Pearcy has been working hard to complete his highly anticipated fourth solo album, while at the same time keeping busy performing shows across the U.S.

“I am very happy with the new music and the diversity of the songs. It's taken some time. I'm sure all the fans will be excited too,” says Stephen about the new album.

“Smash” was mixed and mastered by none other than the legendary Beau Hill, the producer of RATT's first four albums, among many other hit records. Stephen will be supporting "SMASH" with live dates in the U.S. and internationally.

With over 15 million records and gold and platinum long form videos sold in the U.S. alone with RATT, touring the world with over (20) albums to his credit with other ventures, solo projects, compilations, best of records, and other bands he created, there is no slowing Pearcy down.

Beau Hill has weaved his magic over the years, but not even he has enough polish to buff this one into and decent shape. Give yourself a gold star if you thought I was going to say ‘turd’.

On first inspection, Pearcy doesn’t sound too bad. I was flinching a in anticipation as some of the Ratt stuff I’ve seen on YouTube is rough to say the least.  A good producer can obviously add some spit and polish to proceedings. Not possessing the finest set of pipes, he used them very well and to his advantage in the 1980s. He’s certainly made the best out of an average voice.

‘I know I’m Crazy’ comes off as a plodding grunge track, which would have been fine in 1992, but some 25yrs later, its off the mark by some distance.  ‘Ten Miles Wide’ fares a lot better as it’s more in Ratt territory, but not quite there. ‘Shut Down Baby’ is a song that could have gone in a different direction with its decent sounding riff, but gets lost. ‘Dead Roses’ has a bit of a Velvet Revolver vibe and is the best of the bunch so far. ‘Lollipop’ is one of the worst named songs in rock history and screams ‘meh!’.

‘Rain’ has an 80s based riff, but doesn’t have the legendary Ratt bridge or chorus to lift it. ‘Want To Much’ is a decent enough song, but given everything that precedes it, its not that hard to be good, but it does have elements of vintage Pearcy. Just ‘Jamie’ out of the last five songs deserves any credit, but unfortunately, the rest are just uninspired and unforgettable. If this or Jack Russell’s albums are in any Top 10 lists come the end of the year, I will definitely show my arse in Woolies window! Or whatever the equivalent is in 2017 – ‘Home Bargains?’

Smash is aptly titled, as that’s what I’d probably like to do to it.

When I first heard ‘Infestation’ in 2010 I was very impressed as this was VINTAGE Ratt. ‘Smash’ on the other hand is instantly forgettable unfortunately. It reminds me of Journey’s last jaunt to the UK, it looked like they just wanted to not just take the money and run, but count it on stage in front of you to piss you right off. Pearcy is the same here, probably not believing that someone has given him a wad of money for someone who peaked musically some time ago. That hurts for me to say that to a person who sang classics like ‘Back For More’, ‘Round And Round’, “Wanted Man’ and ‘Lay It Down’

Come on Frontiers, pull your finger out. I’m hoping Pride Of Lions wont let me down….?

Tracklisting -
I Know I’m Crazy
Ten Miles Wide
Shut Down Baby
Dead Roses
Lollipop
Hit Me With A Bullet
Rain
Want Too Much
What Do Ya Think
Jamie
I Cant Take It
Passion Infinity
Summers End
Posted by aorwxm at 22:15