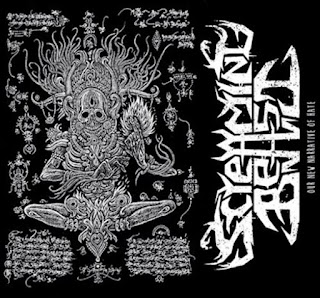 'Our New Narrative of Hate" is the Manchester band's first full length album. Formed in 2013, the band have released two previous EP's, and with a large range of influences ranging from Dream Theatre to Pantera, they promise a heady mix of styles wrapped up in a solid metal box.

The band began as the project of vocalist Anton War and drummer Daniel Mucs in the summer of 2013.  Once songs took shape, the band released the first EP “Blistering Lies” in February of 2014, followed by a second EP “To Assail and Conquer” in September 2015. So what about the album....?
The opening track comes in with what I can only describe as a good old chugging riff with the full intention of making your head bang, as this genre of rock is meant to do. Entitled 'This Day, This Dawn ' Its a Ronseal song - it does what it says on the tin, waking you up and getting the blood flowing. The vocal style is not to my particular taste but sits well with the songs train like progress that's only interrupted by a good solid no nonsense metal guitar solo. The anthemic chorus makes ' This Day, This Dawn ' an excellent opener and leaving you wanting more. 'World with Fate ' delivers more of the same, solid riffing interspersed with some technical drumming and guitar work. It keeps you going but the vocals just don't seem to bind this together. A good strong bouncing track that needs a strong voice to lead it but the muted radioesque singing just doesn't work for me. Ending with some more meaty riffs though it leads you on and into song three.

So far the best song on the album 'Giving into Fear', swings from the atmospheric intro into the meaty guitaring and back again, in places its almost Linkin Park or Papa Roach, then throwing you back into Pantera without mercy. A much stronger vocal performance binds this track together and leaves you thourougly satisfied. 'Silent Submission', hits you hard. Straight out of the box, this band are warming up now. The mid song break showcasing the bands influences, containing an 80s style guitar solo that sits well, then it's back to the metal.

'Despair', is aptly named as it conveys the feeling throughout. Lurching from new metal to rock, diva style guitar solos, almost prog in places but still with that meat that flows through every song. 'Lost and Betrayed', seems to be a filler track, heavy and short, a confusing mix of drums and guitar. 'This Fray', rolls along okay but seems to lack the conviction of previous tracks, very Pantera-esque and musically okay. 'Society of Slaves', is heavy from the outset, and I mean heavy! Blurred guitars, banging drums, again like a very heavy prog song it storms along in a cacophony of confusion. 'The Nameless' is a return to form with echoes of the fore mentioned 90s new metal and thrash thrown together with a crisp 80s guitar solo. There are some nice vocal harmonies mixed with the shouty stuff. With 'Reborn', I really wanted these guys to throw up a pearler here but despite being a good solid metal track there's nothing new. It's chunky and fast but lacking in previous tracks diversity. Although nothing to be ashamed of, I really wanted this to end with something special.

All in all Screaming Beasts first foray into a full length opus shows a lot of promise and despite being a tad heavier than my usual speaker fodder I found myself leaving it play, even when not scribbling my drivel about it . The opener 'This Day, This Dawn', 'Giving into Fear', along with 'Despair' are stand out tracks and definitely highlight the bands potential. If you like your metal with a little bit of substance and not just the shouty stuff give them a go.