Palace Of The King - 'Get Right With Your Maker' Album Review 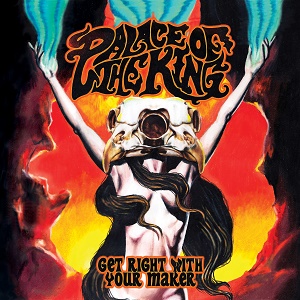 Palace Of The King – Get Right With Your Maker

Every now and then, a band fires a shot across my boughs, one that I’ve never had the pleasure of hearing before, and proves to be an absolute delight. This is Palace of the King, with their third album ‘Get Right With Your Maker’. They are an Aussie band and hail from Melbourne, they average 100 gigs a year and it shows here. They have also supported fellow rockers Airbourne.

Not many bands would have the confidence or balls to open up with a seven minute epic scale song, but POTK have no such worries. Is pure, unadulterated classic rock – and I am immediately reminded of a similarity to Scorpion Child – as POTK throw all their musical classic rock weaponry into ‘I Am The Storm’. It has some great organ and guitar work, joining Tim Henwood’s great vocals for an aural soundscape, of 70s sounding rock. On this Henwood even sounds similar to Scorpion Childs Aryn Jonathon Black. Even the mid section ivory tinkling shows touches of The Doors, giving it a psychedelic feel.

'It's Been A Long Time Coming' is the second single from GRWYM, its drenched in nostalgia, with a bit of a Nuff Z’Nuff sound to vocals. They show that its not a single track sound, and show they have more strings to their bow on ‘Sold Me Down The River’ which has a 70s funk sound, as does ‘Dog With A Bone’. Its like being hit with a one-two sucker punch, as the songs come thick and fast, with not a drop in quality to be seen (or heard), ‘Said The Spider To The Bird’, ‘Move Through The Fire’, and ‘The Serpent’ all have the hallmarks of band who are as tight as a nut that been tightened with superglue! Its all pretty damn good as the rhythm section of Travis Dragani and Anthony Licciardi drive this beast forward. It’s the kind of band and music, that would sound fucking huge at a live gig. Scrub that, the riff and bass line on the song Horizon are mega. I could feel it moving my trousers, in a good way!!! The pacing of the album is excellent, ‘Fly Like An Eagle is short and sweet, but what they cram into a song under 3 minute is just great,  a pounding at your core effort. Finally we get a POTK showcase with ‘Back On My Feet Again’.  Its only 3.46 short, but its  type of song that could easily take up half a set!

Where’s the other five minutes of song gone? Bands used to do this quite often, but we actually get a hidden track, a title track ‘Get Right With Your Maker’, a song that lends to The Black Crowes, or The Temperance Movement in an acoustic blues style.

The album cover even bears more than a passing resemblance to Scorpion Childs last album to the point of plagiarism!

If you’re new to them, like me, then you’re in for a fucking treat. If you’re already a fan, what are you waiting for. For fans of 70s influenced rock, and the likes of Rival Sons The Black Crowes and Scorpion Child. As you can tell, what they are doing isn’t exactly new (what is?), but what they do, they do it so fucking well!!

Rock is meant to be played loud, but none more than this dirty, and beautiful beast. Crank it up and enjoy!! 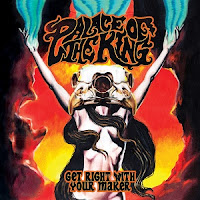 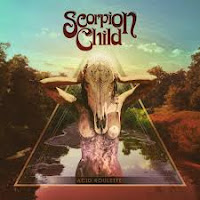