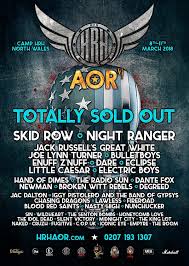 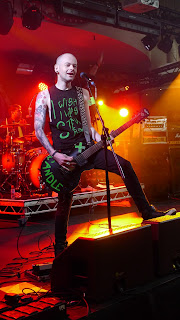 I could not be there for the full day, so managed to cram in 4 bands. First up were The Idol Dead. These are another band that I’d never come across before, but full marks to the organisers for getting them on the bill. Again there were as far away to AOR, than Bulletboys are to enjoyment. They reminded of Teenage Casket Company from 2016 that came on and blew the place up. The Idol Dead were no different. To say they had the audience in the palm of their hands was a massive understatement. No solos as such, but they had some of the best songs and riffs this side of the Pennines, all played out with an attitude and swagger bigger than Snowdon. They are on tour in May, I strongly advise you to get your arses over to see them. The highlights of their set were ‘Blackout Girl’ which reminds me of early Coheed & Cambria, and the wonderfully titled C.H.I.M.S.A. (Christopher Hitchens Is My Spiritual Animal). If they had dropped the mic at the end, it would have rounded off a near perfect performance. 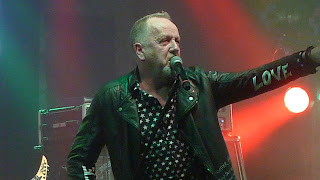 Blood Red Saints were on first on the main stage. My worries that they might not be playing to a decent crowd were thankfully the opposite. The room was pretty much filled out and BRS deserve to play in front of numbers like this. They had 45 minutes to make statement, call it 35 if you can shut Pete Godfrey up. That’s a big part of the show. ‘Another Freak’ from their latest album was a stormer, a lot of bands try to write anthems, and very few can do it better than BRS, especially on ‘Mercy’ with the harmonies from Chemney, Naylor and Revill making it a killer. The band were trying to move on quickly and pack the songs in, but stopping Pete Godfrey  from joking, as like trying  to stop Mr Creosote from having a ‘weffer thin mint!’

Pete royally took the piss out of Rob Naylor’s voice (who, when asked to say something, stated he had a sore throat), with Pete commenting ‘you sound gay, where did you lose your voice? In the men’s toilets? ‘

The large venue suits these bands to a tee, as this is probably the best I have seen BRS perform. Amongst the golden nuggets was a brief rendition of Take That’s ‘Back For Good’. Follow this up with ‘Live and Die’ and ‘Kicking Up Dust’ and the set was glorious. God help who had to follow this 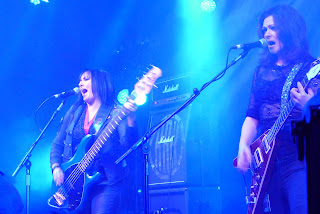 So, from the Blood Red Saints to one of France’s patron saints, the all female Joan ov Ark. I would stake (see what I did there) a good amount of money that a lot of the punters were like me, and were a new experience. Despite having to follow Ted Bovis and the BRS, Joan ov Arc were out to prove a point, that it’s not just the blokes who can kick ass. The crowd had faded by the time they entered the stage. From what little I’d seen of them on YouTube, it was nothing when compared to their live performance. The vocals courtesy of Sam Walker were both powerful and ear-bleedingly high. Her sister Shelley (lead guitar), looked as if she wanted to prove a point. There was a bit of overplaying, but I can easily forgive that especially when they want to showcase their talents in a setting like this. Four songs in and the crowd had returned, and they were very well received. They proved that they could mix it up, with the more soulful vocals of bassist Laura Ozholl taking lead on a couple of songs. An anthem for the girls was proclaimed, and it kame with a killer riff, and clearly one of the best songs of the set. They chose to finish their set with an all-time classic, Freebird. It takes some balls to play a track like this, so it was a good job than none were present, and they knocked it out of the park, with Shelly Walker showing how good a guitarist she is. 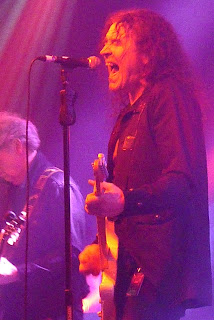 My final band of the festival was up next, and what a band, and performance it was from Wales’ own Nev MacDonald of Hand of Dimes. I felt a bit like Dorothy Boyd in Jerry Maguire, as he had me at ‘Hello’. Very few singers have this talent; and Nev is one talented bloke. He sings effortlessly, and for me, it was THE vocal performance of the weekend. Joining him from eons back was Andy Robbins (ex-Skin and Jagged Edge). The area was as full as it was for a headliner and it was only 4pm. The set was only seven songs, but fook me, what a seven songs it proved to be! I was lucky to catch him a few years back at Steelhouse in 2013, so it was great to them higher up the bill. ‘Looking at You’ is a classic, and had the whole crowd in raptures. To be honest, Nev could have sung ‘Shaddup Ya Face’ and I’d like it at this point. Hand of Dimes was on fire (damn I should have used that for Joan ov Arc), and in ‘Jacobs Ladder’, a soulful blues number that borders on perfect. It is without doubt their finest work. It was their final track that almost took the roof off the place, Skin’s ‘House Of Love’. It was commented that Nev MacDonald should be a household name. Well, he is in the Buckley household.

Hand of Dimes came a close second to Night Ranger, and join Blood Red Saints, The Idol Dead, and Aaron Buchanan and The Cult Classics as the stand out acts of AOR VI.

I’m hopeful that the guys at HRH will come up trumps next year and deliver the goods as an AOR festival. To many bands were either not AOR or were on the wrong stage (especially Midnite City and Degreed). On the way home, we talked about this in detail, and Styx would be the choice. One of the few bands that can still cut it and matches the high standard of Night Ranger.

The festival goes from strength to strength, they have a brand that doesn’t necessarily cater to the AOR crowd, in a good way.