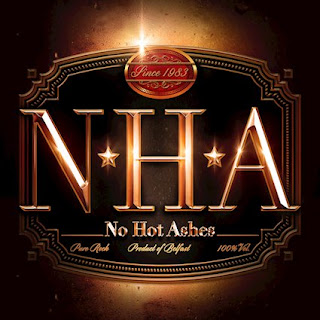 I think quite a lot of the Melodic Rock /AOR community could easily name a band that back in the day 83-91, that could have been a household name, only to fall by the wayside and then fade into obscurity. Loads of bands took a wrong turn  (like Spinal Tap) that wasn’t their fault, it just didn’t happen. A few from this period have decided to dip their toe in the water and make a ripple. Some are riding the crest of a wave, and this is what I hopefully expect No Hot Ashes to do. There’s a cluster of bands in the UK that stand head and shoulders above the rest (Angels or Kings, Moritz, Vega, Dante Fox, Blood Red Saints, Airrace, and FM), and on this standing, I expect No Hot Ashes to join them.

Formed in 1983, they were influenced by all the great bands, Journey, Foreigner, Whitesnake, Lizzy and Ozzy. They put out their first single ‘She Drives Me Crazy’ in 86. Around this period they landed support slots with Mama’s Boys, Magnum, Girlschool, and Steve Marriott.

They managed to sign a record deal in 1988, joining Motorhead, Girlschool and Hawkwind on the roster of talent, recording their first album later that year. The band upped sticks and headed off to London (with a stick and knotted hankie) to be nearer to their record company. Like many, what began with a new hope, ended in disaster, as the album was never released.

Fast forward to September 2013 where NHA formed for a one off tribute gig, which has snowballed from here. Since this, NHA have supported Aerosmith, Foreigner, UFO, and Scorpions, and have had a UK four with FM and Romeos Daughter and have graced some major festival stages along the way.

I’ve banged on about AOR on a few reviews over the years where bands who want to do a melodic rock album should go and listen to some of the classics and steal (borrow) the best bits and make it into their own style. I’m not saying they have blatantly stolen riffs, far from it, but this album is 100% Melodic rock/AOR and will be jumping to the sharp end come the ‘Best of’ tables come December.

NHA have combined, great riffs, melody, twin guitars, excellent vocals, and parpy keyboards adding touches in ALL the right places. Just listen to opening track ‘Come Alive’ and tell me this isn’t great. If you hadn’t seen any pics, I would swear that Eamon Nancarrow was mid twenties and decked out like the fifth member of Steel Panther. His vocals belie his age, they are fresh, and with a great melody. The song includes a little keyboard refrain that reminds me of ‘Jane’ and ‘Fools Game’. We are definitely on the right track here folks! ‘Good To Look Back’ is a bona fide statement, but NHA are definitely in the now and will be looking forward from here on in. Nancarrow shows his chops after the solo hitting notes and length that few can muster. ‘Satisfied’ is a song that will be anthem-like in their live shows with its great solo and bluesy feel.  As a melodic rock band, it wouldn’t be one without a ballad in tow.  In this case, it’s ‘Boulders’, and reminds me of Tough It Out-ere FM. ‘I’m Back’ is one of NHA’s gems that survived the 80s, and you can see why it is here. Halfway in and its clearly the song of the album so far. Nancarrow wails like a Banshee, and if that’s replicated in a gig, I’ll gladly buy the bloke a pint! It is 80s heaven, where keyboards tussle with guitars for prime real estate, where bands like Journey and Foreigner live, and so do NHA.

‘Glow’ has a pulsating and crunchy riff and sees them on the heavier side of AOR before the melodic chorus kicks in, building to its guitar solo. ‘Over Again’ sets out its stall with its lush harmonies and guitar work. As we get to the sharp end, NHA has a couple of faster paced rockers in ‘Johnny Redhead’ the final track, ‘Running Red Lights’. Sandwiched between these is the brown sauce to your bacon butty, an excellent cover of Rick Springfield’s ‘Souls’ and fits NHA’s style like Alvin Stardust’s glove!!

What I like about this, is that its been 35 years in the making, and it sounds like that have given blood, sweat and tears to every song. They have not overplayed it either, and at just 10 tracks, there is not a filler in sight, when they could have had a tendency to put 15 songs on it, and make it a bit ‘meh!’

Credit to No Hot Ashes for giving it another bash. Melodic rock is crying out for quality bands and albums, and you can look no further than this.

For any fan of melodic rock, there are two books that recount this period, and they will have you reminiscing, laughing out loud, and possibly crying. One is Tony Bell’s ‘Life In The Bus Lane’; the other is by NHA’s Eamon Nancarrow ‘Hollywood Star’. In fact if I were Frontiers I would send a copy of this out with every album.

Tragically NHA lost their bassist Paul Boyd to cancer in January 2017. Paul plays bass on all the tracks and this is a fitting epitaph, and No Hot Ashes are respectfully dedicating to Paul’s memory.