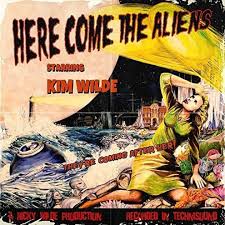 For those of us of a certain age and a rock/pop inclination, Kim Wilde was one of the artists in the early 80s who made an impact when 'Kids In America' was released.


It possibly helped that Ms Wilde was stunning besides being capable of belting out a rock/pop anthem that has stood the test of time, oh that and the fact I was a spotty immature hormonal teenager.


It was probably the closest thing to a rock song that I remember by a female artist that year.


To be honest as the 80s progressed I lost interest in pop music as rock began to consume my world. However as the years have progressed I’ve gone soft (or mellowed and broadened my musical taste as I prefer to call it) so it came as a pleasant surprise when I was asked to listen to 'Here Comes The Aliens' by “THE Kim Wilde, you know, the real one”.


The album cleverly starts with the sound of a radio being tuned to different channels with that crackle and hiss that youngsters of today’s digital age won’t understand. The guitar kicks in and '1969' starts and it’s a decent catchy track with its roots firmly set in the 80s (and includes the album title in the chorus).


It becomes clear very early on that over the years Ms Wilde has not suffered from her voice losing any of its distinctive sound, there are even tracks where she lays it bare and it delivers in style.


'Pop Don’t Stop' follows and shock horror, it’s a pure pop song even down to having a keyboard intro that is so Buggles that the video will most probably kill the radio star. I suppose there is a clue in the title and Kim (oooh look at me getting all personal) is ably supported on the vocals by brother Ricky and it’s as pop as you can get.


The album is like a nostalgic trip back to the 80s but with a modern twist added, the synth based tracks such as 'Stereo Shot', 'Yours Til the End' and 'Addicted To You' firmly offer a nod in the direction of disco/dance with catchy choruses to match. You can imagine certain tracks making it onto a Miami Vice re-make without being out of place.


'Birthday' and 'Rock the Paradiso' are massively upbeat good time songs. They are in the same vein as Kids in America but competently stand up in their own right. 'Rock the Paradiso' in particular has a real B-52 Love Shack vibe to it, proper rock guitars and a bounce along catchy chorus.


For me the stand out track on the album and the least “poppy” is 'Solstice'. It starts with a mournful Celtic style lament with Kim’s voice absolutely nailing a haunting verse before the piano gently enters and the following lines are delivered:


“They didn’t make it home, now her hand drops the phone;


She stands so paralysed;


Your washing’s on the bed, the last words that was said;


The song then moves into a Carpenter-esque chorus never losing the feeling of loss, sadness and emotion. It’s a track that screams out “give me a decent budget for a video to accompany this and I’ll give you a massive hit”. It really is that good.


In conclusion, if you miss (or missed) the 80s and want to reminisce but with newly written songs with a modern take then you’ll love this. Well unless you’re my wife who stated after hearing just a couple of tracks “It’s inoffensive”. WTF!! I don’t think you can be more offensive with a review if you tried. Her view has nothing to do with the fact that she is also a 50 something blonde, oh no, not at all……much.


Whilst 80s pop is not totally my thing, the album has hidden treasures such as Solstice and a range of 80s styles all in one album. To put it in context, I think this album will allow Kim Wilde to tour and not rely on a short set of the original 1980s hits she plays at the revival concerts.


I hope to see it played live in Glasgow in April, I really hope it translates to the live environment.


Whilst the album has synth/disco/rock moments just forget the snap and crackle, this is POP. I’ll get my coat……..