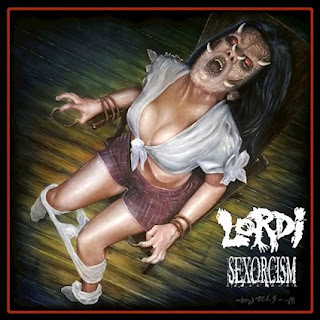 Entering a new era, Lordi is releasing their 9th studio album ”Sexorcism”, which is said to be their most controversial album to date, on May 25th 2018 - being an uncensored shot with a full on in-your-face attitude that is Lordi’s brand."Sexorcism" was recorded and mixed at the legendary Finnvox studios by Mikko Karmila, who is no stranger to the band being the producer of the band's 2014 release ”Scare Force One”.

The opening track, ‘Sexorcism’ starts well in usual Lordi style and is a great tune, but the lyrics fail to ignite me in anyway shape or form. ’Your Tongue’s Got The Cat has a surprisingly soft rock feel to it and builds up to a pretty good melodic chorus. Not too bad so far.Track 3 ‘Romeo Ate Juliet’ starts fantastically with a great Metallica-style intro as does ‘Naked In My Cellar’ but on the latter it’s the vocals in the verse that let down what is a potentially great song.
Next offering ‘The Beast Is Yet To Cum’ is filled with manic screams in the verses and a lovely short church organ section (which is always a favourite of mine) which works really well, and I’ll be honest I’m warming to this album.‘Polterchrist’ starts with an almighty riff underneath some haunting female vocals and is a great stop/start tune with some nice double bass drum throughout. So far the best track on the album.
As we progress, we’re treated to some great riffs and (for me) some surprisingly really good tracks which to tell the truth I wasn’t expecting. Each track still rears its Finnish doom chords at some point but this wouldn’t be Lordi if it didn’t, they work really well and the music wouldn’t be the same without them.‘Sodomesticated Animal’ has some chunky riffs again. What I’m liking about Lordi is there seems to be a pattern of heavy verses, followed by melodic chorus’. Overall a very enjoyable album from Finland’s finest. The vocals aren’t the greatest, but they do compliment the music in their own unique way. Lordi fans will not be disappointed.