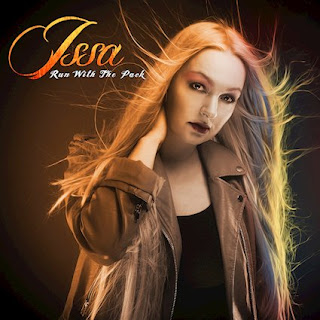 Issa - Run With The Pack

Review by Dean Buckley
Norwegian/ Brit ISSA returns with what is her fifth and probably best album to date ‘Run With The Pack’, I've always preferred ISSA live than her recorded albums. Im finding past efforts struggled with a ‘style over substance’ issue but on ‘RWTP’ all is forgiven . The new line up includes Mr Frontiers himself Alessandro Del Vecchio tinkling the ivories, the monster guitar work of Simone Mularoni from progressive metal band DGM . The album is rounded out by Andrea ToWer Torricini from Vision Divine on bass dutis, and Marco Di Salvia from hot new band Kee of Hearts on the drum stool.  This is by far, Issa’s best line up yet.  It's brought a new cohesiveness and drive to what might be ISSA's most consistent release .

ISSA is no stranger to the odd duet this time around with the sublime ‘Sacrifice Me’ featuring the mighty Deen Castronovo (he of Revolution Saints fame) , the gorgeous balladry of ‘How Long’ showcasing ISSA’s vocal prowess to it's fullest or the much harder hitting ‘Closer To You’ with a huge guitar solo . ‘Run With The Pack’ is ‘all killer no filler’. Production is handled by Mr Del Vecchio so the sound is crisp and punchy . If you’re a fan of quality melodic rock or just female fronted rock in general you will love this release I certainly did.