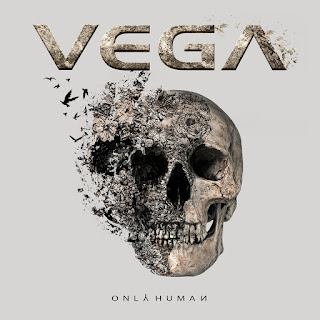 ‘Only Human’ is the fifth studio album from UK rock stalwarts, Vega. For this album, the guys have knob twiddled it themselves and also brought in Harry Hess of Harem Scarem on mixing and mastering to add the final spit and polish to yet another fine piece of work.

‘We wear our love of 80’s rock music on our sleeve, but we have also injected our love of modern rock music to it. We aren’t trying to rehash anything; the sound we have achieved is 100% Vega. We didn’t want to try and guess what people and get it wrong.’ states Nick Workman.

I’ve been in it for the long haul with Vega, Both watching and listening to them grow with each and every album. Vega’s train has kept a rollin’ the last couple of years, which has seen them share stages with the likes of Magnum and Dan Reed Network; played numerous festivals such as Steelhouse, Planet Rock’s Winter’s End, HRH AOR V, and Rockingham to name just a few.

So what do we have for album number 5 – ‘Only Human’. Well, if you’re here because you’re already a Vega fan then settle in as it’s all very good. If you’re not a Vega fan, where the fuck have you been? You can read reviews of all of Vega’s previous albums (and no doubt HN) using superlatives like ‘anthemic’, ‘huge’, ‘harmonies to die for’ etc. You would think that these terms were dished out all willy-nilly like, especially when it’s the norm for today’s reviewers to give out top marks like a kiddie fiddler would hand out sweets in a playground!

‘Let’ Have Fun Tonight’ tells you all you need to know about Vega, crunching melodic opening riff, coupled with a swagger and style that 80s bands would trade in their wigs, foiled cucumbers, and leg warmers to catch a piece of quality like this. Nick Workman, has grown remarkably from the Vega beginnings – he is hitting notes that he couldn’t probably hit 20 years ago, and carries the Vega flag into battle.  If not Nick, then its Harry Hess!!!!

‘Worth Dying For’ is in a similar vein to ‘White Knuckle Ride’ with its phrasing. ‘Last Man Standing’ is pure 80s MTV, and is pure Americana melodic rock. ‘Mess You Made’ has ‘single’ written all over it (or at least a video!). ‘You would think that Mr Elliott had a hand in the title track as it’s a Leppard track right through to its core. ‘Standing Still’ has a nice lead in, before the inevitable Vega chorus grabs you. ‘Turning Pages’ is one of the biggest and best songs on ‘OH’, a ballad of sorts that I expect to be a staple of their live set for years to come. ‘Fade Away’ reminds me of a carefree and uplifting song, similar to J.Geils Band, or The Cars, and had it been 1986 it would be all over the radio. Its all over too soon which is always the sign of a damn good album

Vega have done it yet again. They remain at the pointy sharp end of rock music, and rightly so. They’ve served their time, and its now time to be the big band they deserve to be. Big props to all concerned, the Martin brothers have excelled themselves in their writing, Nick Workman sounds fantastic, and the rest of the guys are all playing at the top of their respective games.

What I’d really like to see, if Joe Elliott really is a supporter of Vega, then give them a slot on your UK tour later in the year.