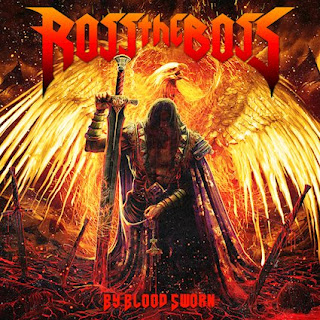 Ross The Boss – By Blood Sworn

Guitarist Ross the Boss’ stature in the history of hard rock and heavy metal has been well-solidified for decades, with a resume including some of the most influential and hardest-hitting bands of all-time, particularly both the Dictators and Manowar. And he continues to rock - as a member of the group DeathDealer, and also, as the leader of his own solo outfit, which has issued such stellar releases as ‘Hailstorm,’ ‘New Metal Leader,’ and this latest offering, ‘By Blood Sworn.’
Joined by Marc Lopes on vocals and keys, Mike LePond on bass, and Lance Barnewold on drums for the sessions (Steve Bolognese will beat the skins on the album’s tour), ‘By Blood Sworn’ was produced by Dean Rispler, and will be released April 20th via AFM Records.

The only way to appreciate this album’s superb production is to crank it up!! I’ll be 100% honest in saying that I had never heard of these guys but I am so glad I got to review this album. The opening Iron Maiden Transylvania-esq riff of album titled ‘By Blood Sworn’ sets the mood just perfectly. A great opening track which scuttles along just nicely. ‘Among Them Bones’ opening riff will warp you straight back to the late 1980’s / 1990’s rock era. It’s speed changes will keep your foot tapping and head nodding. Sublime stuff. 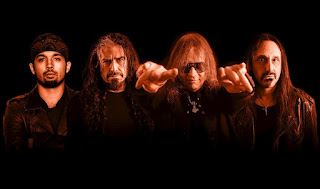 ‘This is Vengeance’ reminds me in parts of Holy Terror’s ‘Judas reward’ from their ‘Mind Wars’ album of 1988. ‘We Are the Night’ is another angry double-bass led thumping track with a great opening riff. Things slow down for ‘Faith Of The Fallen’, an epic ballad of synth, melodies and great acoustic trickery with a great chorus. The guitar solo will just suck you in.

‘Devil’s Day’ picks things up again superbly by cranking out rock and roll at it’s very best. Being a bass player myself, the opening riff of ‘Lilith’ was met with great appreciation and I just love the way the rest of the band follow. A great doomy, moody verse to this tune that builds slowly and superbly into the chorus, with a fantastic speed change and a great Black Sabbath type riff thrown in for good measure.

What I’m loving about this album is that the music does the talking as well as the lyrics. Iron Maiden were the first band that I felt that with. ‘Play Among the Gods’ hits hard and fast, as does ‘Circle Of Damnation’, although these latter two sound slightly more mainstream than the rest of the album. Nothing wrong with that of course, and ‘Circle’ is sure an arena anthem to rock to and a potential great Radio airplay tune. Lots of Iron Maiden sounding riffs in this. It’s brilliant stuff.

‘Fistful Of Hate’ rounds things off with it’s Native American intro. Very ‘Indians’ by Anthrax, as is the opening riff which follows. This speeds along just nicely to an unexpected abrupt ending which for me, works well. See you, good night, Bang!! I feel thoroughly entertained.

So, would I recommend you buy this album? 100% YES!! Would I go and see these guys if they hit these shores?? ABSOLUTELY!!!