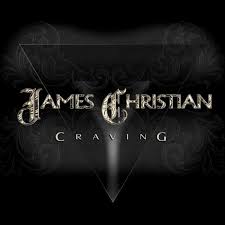 'Craving' is the 4th release by James Christian. I had limited knowledge of Christian as the lead singer of House of Lords and only heard a couple of his solo tracks so Craving was new to me.

The press release blurb states that “Craving is a strong personal statement from James Christian, a mature artist, songwriter, producer and performer”. What I took from this given song titles such as 'Heaven is a Place in Hell', 'Jesus Wept', 'If there’s a God', 'Love is the Answer' and 'Amen' was that there was going to be a Christian influence (no pun intended) and I wasn’t wrong. 'Craving' is a real mixed bag. There are some classy AOR tracks but also some very mellow tracks that don’t, in my humble opinion, sit comfortably with the rest.

JC, hmmmm I think maybe someone else with those initials influenced some of 'Craving', has a distinctive voice and does write some catchy tracks, The opener 'Heaven is a Place in Hell' is a cracking start, a bounce along song, upbeat with an infectious chorus. 'Wild Boys' follows in a similar vein but the wild boys mentioned seem a bit tame. The track is all American sounding and again full of energy but no menace to it. The title track 'Craving' follows and is for me the track of the whole album. A real slow burner of classic AOR with a wonderfully layered chorus and full of emotion. It really showcases JC’s voice with a superb acoustic sound that becomes stronger when the chorus kicks in. Impressive stuff. 'Jesus Wept' suffers due to the quality of the preceding track, it has a sound of Heart and actually is a grower. 'World of Possibility' for me never got going, it’s a soulful ballad but for me a bit too clichéd and lacked the depth I feel the song needed. 'Sidewinder' lifts the tempo and has a touch of Aerosmith in its sound but after a decent start it kind of drifts from the early promise. 'I Won’t Cry' is another ballad and has some great vocals and a top guitar solo, another grower. Sadly 'If There’s a God' brought me back to earth with a bump. It is so mellow it borders on total blandness. If there’s a God he wouldn’t want this on his play list.

'Love is the Answer' kind of pulls the album back on track and has a mournful feel to it that is lifted by the positive feel of the chorus. 'Black Wasn’t Black' gets back to proper rock, a few more of these were needed JC, it’s got the feel of a proper AOR with a great guitar solo thrown in. It has a nod in the direction of 'Highway Star' and I personally wish the album finished there but 'Amen' finishes it. 'Amen' is obviously a song personal to JC but while I imagine it’s supposed to close the album in a melancholy way it was a bit too 'Songs of Praise' for me.

'Craving' as I said is a mixed bag, some really decent stuff but I found the none too subtle Christian references a bit much in a couple of tracks (this statement by me, who had a full emersion baptism when 18 but have since lapsed). For some people singing about sinners, un-repenting, crucify and other such stuff might appeal but the lesser tracks left me a bit cold. That said if Mr Christian’s beliefs are correct I’ll be going to a place that’s a lot hotter when I die.

However on the positive side James Christian has a very good voice, he obviously is a decent song writer and he has employed a bunch of very good musicians. The album like a few of the tracks is a grower and after a couple of listens I’m almost converted…….almost. I’ll play this again quite happily and think live James Christian would be well worth the effort of seeing.