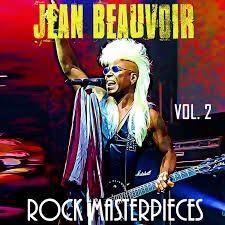 Back in June I reviewed Vol 1, and what a treat it was for one of rocks true icons, Jean Beauvoir. Well, now AOR HEAVEN is currently gearing up to release Vol 2 and was one of the soundtracks of the Summer. Vol 2 features more songs from his solo career, including his International multi-platinum debut "Drums Along the Mohawk" album, from his band Crown Of Thorns, his band Voodoo X, which also made music and video history, some fan favorites. As with Vol 1, Vol 2 songs will also be remastered.

Beauvoir is also working with best selling British author Simon Cox (Cracking The Da Vinci Code) on a new book which will capture his storied career in music and entertainment. The iconic Blonde Mohawk of Jean Beauvoir has been an ongoing major influence on US and International pop culture in music, sports, film and TV; including several cartoons; influences that are still being seen and heard today. As a member of the Plasmatics, the most outrageous, controversial, successful Punk band ever and a longtime songwriter and producer for the Ramones, hailed as the greatest Punk band in the world, Jean Beauvoir is forever linked to two of the most revolutionary bands of the twentieth century. He was a member of the Plasmatics during their most successful and revolutionary time in music and is the only member of the Plasmatics who went onto a successful solo, production and writing career with over 40-million records sold to date and featured on over 240 albums.

Music from his solo debut album 'Drums Along the Mohawk' was hand picked by Sylvester Stallone for the film Cobra which led to Beauvoir making a deal with Al Teller (President of Paramount Pictures). Through working closely with Branson, Stallone and Teller, Cobra received the highest advertising budget for a Hollywood film to date at the time featuring the single "Feel the Heat" as its title track.

Thank heavens for ‘No Limits’, a BBC show from one of the major importers of melodic rock/AOR, Jonathan King. This show was better than a lot of TV shows at the time (the UK had yet to receive the mecca of all music, MTV) so we got our hits in small doses through Top Of The Pops, ECT, and The Tube. King was ahead of the curve, introducing me as a 17-19 year old to bands such as Guiffria, Warrior, (Patti Smyth), and songs we would never have heard of from the likes of Lou Gramm, Sammy Hagar, Y&T, and Jean Beauvoir. This was my first interaction for his single ‘Feel The Heat’. I thought it was fantastic, a song that went against my rock upbringing on bands like Rainbow, Rush and Whitesnake to name just three. The guy had a huge mohawk, a great voice, and in FTH a huge chorus. I was in for the long run.

Thanks to grunge and music at that time having little to excite me in the way of music, bands like Crown Of Thorn’s passed me by until I heard ‘Hike It Up’ at a rock disco in Wigan. Yes, Wigan! I turned to my esteemed colleague to ask who it was. Once explained I picked up the phone (internet was still shite) and snapped up their debut about 3 yrs after it was released. It was that good, it filled a gap that had been missing. It was superb.


Vol 2 picks up where Vol 1 left off, and its all systems go with the opening salvo of Crown anthems, ‘The Healer’, Lost Cathedral’, and ‘Live and Die’. If you're a JB fan already, I don't need to sing the praises of these 3 songs. If not, where the fuck have you been and buy this album!!

There’s a few songs that are new to me – mainly the Voodoo X ones. ‘I’m On Fire’ is a rip snorter of a tune, a killer riff competing with one of the best vocalists in the business. Fast and frenetic from beginning to end – typical Beauvoir! ‘A Lover Like You’ was co-written with Paul Stanley and has KISS DNA running right through it, and I'm pretty certain that's Stanley chipping in with background vocals, and is another gem of a song.

‘This Is Our House’ from ‘Drums..’ is about as lite as JB gets, and still manages to be anthemic. ‘Motorcycle Loretta’ is one of the best songs from Lost Cathedral, and is built around some splendid riffage. ‘Missionary Remedy’ Is as late in the day as it gets for a COT appearance. Its OK, but its nowhere near the same standard as anything from the COT debut. ‘Never Went Down’ is pure saccharine soaked pop rock, and sounds as if it was destined to be in an 80s flick, the type of song that John Hughes used to pepper his films with.

‘Winterland’ is probably in my top 3 all time JB songs, the type of song that just cheers me up, from the opening few bars, to the killer riff, and the awesome chorus it never fails to hit the spot. It always gets cranked up in the car. ‘Same Song Plays |On and On’ has US hit written all over it. And reprises some of the same sound from ‘Feel The Heat’, either that or I’m losing the plot. ‘Searchin’ For A Light’ couldn't be any more eighties if I was sat here decked out in spandex and leg warmers and takes you back to the heady days of MTV. From the debut are a couple of songs, the balladic ‘Till The End’ but its the attitude laden ‘No You Don't’ that gets my vote. Its Voodoo X that closes out Vol 2 with ‘Happy Birthday’. If you're fed up of the one 30 billion people know, try this one next time outrageous

Volume 2 answered my questions from Vol 1, with COT songs making up over half the album

This is essential for anyone that like their music with a huge slab of riffage and big anthemic, melodic choruses. I cant think of many better anthologies that showcase an artistes talent more than these two. If you're already a fan, then there probably not a lot here for you, but it does put all the good stuff in one big collection. If Jean Beauvoir is a guy that passed you by and you are in the market for some killer tunes, buy Vol 1 and 2, and whilst you are at it, get the COT debut.