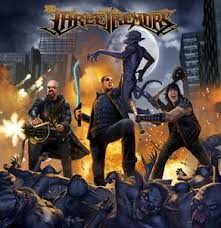 “Three times louder than a sonic boom, three fingers on the hand of doom!” is how the Three Tremors is being described. And when you find out the stellar line-up, there is no denying the mighty vocal power that the newly formed outfit possesses - Tim "Ripper" Owens (JUDAS PRIEST, ICED EARTH, DIO DISCIPLES), Harry "The Tyrant" Conklin (JAG PANZER, SATAN’S HOST, TITAN FORCE), and Sean "The Hell Destroyer" Peck (CAGE, DENNER/SHERMANN, DEATH DEALER).

Vocal power is an understatement!! ‘Invaders From The Sky’ displays some strange yet awesome vocal arrangement. Very Rob Halford / Bruce Dickinson, as you would expect. Musically this opening track is very Manowar with hints of Judas Priest, but I suspect that this is how the whole album will pan out. We shall see!!

‘Bullets Of The Damned’ hits us with it’s heavy double bass drums and pacey power riffs and doesn’t let up through the whole song. This is proper heavy metal, with some nice solo’s. This album is definitely one for the 80’s era Heavy Metal fan. ‘When The Last Scream Fades’ is easily by far the best track so far. Power, potency and energy after an eerie intro.

I’m finding listening to an album with 3 x singers on it all going at it at the same time quite overpowering to be honest. I’m not quite sure it’s working. Musically it’s good, but something just doesn’t quite work for me. Occasionally, you can hear just one person singing and that works fine, but this album is definitely one for the true metal fans out there who will love it.

I can imagine these songs being very powerful live as you can hear this in the albums mixing which is second to none. To be fair, technically, there isn’t a bad song on here, but lyrically it isn’t for me.

If you enjoy listening to Maiden, Priest, Manowar and the like, then this album is for you.
Score 6/10