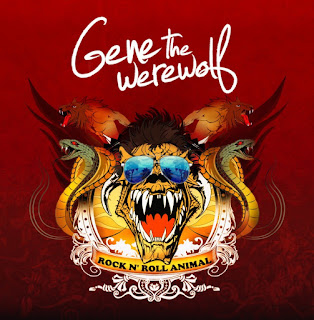 When the email came thru from Frontier for the latest batch of releases, Gene The Werewolf didn’t even register on my radar. It’s a cack name for starters, probably one of the worst band names in history. But it just goes to show that you can’t judge a book by its cover (in this case album). Thanks to a nudge from a mate I gave it a whirl. Thanks to him, I’ve come across one of the best albums I’ve heard this year

“Rock ‘n Roll Animal” is Gene  The Werewolf’s international debut album. The band was formed in Pittsburgh in 2006 and is comprised of five native Pittsburghers. Gene The Werewolf (a/k/a Jon Belan), is the band's lead guitarist and vocalist. He also plays piano. Drew Donegan, guitar and sings, Aaron Mediate (keyboards), Nick Revak (drums) and Tim Schultz (bass and vocals) make up the rest of the band. The guys came together after - conveniently enough - all their previous bands broke up around the same time. Gene the Werewolf's initial promise was to "play music that was as ridiculous as it was awesome!"

‘I Only Wanna Rock and Roll’ takes its lead from AC/DC to the point where Gene surely at some point has been a Bon Scott impersonator in his past career. ‘Superhero’ is a infectious as rock music gets, I couldn’t stop singing this bugger within minutes of hearing it, and ‘Heart of Steel’ is The Darkness, plain and simple. ‘Rock and Roll Animal’ is Sat Nite party rock at its best, unpretentious, and downright fun! Sure they will never win an Ivor Novello award, but if music is about making you smile and enjoy life then GTW have struck black gold!

‘Ruffneck Woman’ moulds the likes of Gene Simmons and DC with a power packed chorus. Its all been done before, but they have a formula that works

GTW has enough firepower to make a Maiden or Rammstein gig look like a firework display seen from 5 miles away.

All the songs just immediately grab you by the neck and force feed you great riffs, catchy as fuck choruses, that just make you wanna smile and thank God (or whoever deity you worship) that you love rock music. When its this good it takes you away from whatever humdrum life you have and transports you into a rock god.

The last work goes to Donegan, “We also like the term diamond-core, because diamond is the hardest rock known to man”, and plenty of bands aren’t shy about flaunting cocky bios and making no secret of their self-perceived talent, but few take it as far as Gene the Werewolf. “We used to say we were the best rock band, but by now I’d say we’re just the best band ever,” Donegan said. At this rate, he won’t be lying for long!

Frontiers have struck gold with GTW, and they will be one of the rising stars of 2013 or there’s no justice. Its straight into my Top 5 of 2012, and probably 2013

Check out their videos below!!

Tracklisting:
Wicked Love;
I Only Wanna Rock N Roll;
Superhero;
Heart Of Steel;
Rock N Roll Animal;
I've Got The Love;
Ruffneck Woman;
Light Me Up;
Firecracker;
Give It Up;
The Ballad Of Gene.
Make Love (Bonus Track Itunes)