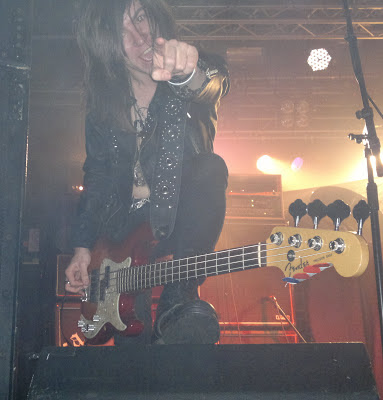 The O2 in Liverpool sees the 3 ages of the finest that British rock has to offer. The Treatment in the early stages of their career, middle aged FM, still producing quality  after 25 years, and the grandfathers of rock, Thin Lizzy with a back catalogue of songs that most would kill for.

It would be an absolute travesty if The Treatment were not to make it big. 30 yrs ago these young gunslingers would be arena/stadium potential with multi platinum selling albums. With the state of music today, the multi platinum part could be difficult to achieve, but the likes of headlining stadiums is not far off for them. 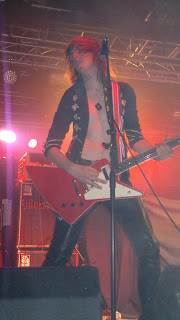 Give ‘em 5 years and I’m certain they will prove me right. For a bunch of young lads, they have the swagger in bucketloads.

Touring with the likes of Steel Panther and Kiss this year has served them well. At this young age, The Treatment are more advanced in their career than the likes of Leppard & Maiden were and that bodes well. Anthemic 'in yer face' raw rock tracks like 'Drink, Fuck, Fight', 'Departed', ‘The Doctor', and 'Shake the Mountain' are well received, and deservedly so. The Treatment, both look and sound the part. Look out for these guys in 2013 as you don’t wanna miss them

FM are a different proposition; smoother, polished and the current line up is undoubtedly the finest live version of these melodic rock masters. Essentially producing a 'best of' set list FM give it all up in the short and sweet time slot they have. Perennial opener, ‘I Belong To The Night’ warms the crowd up perfectly, with frontman Steve Overland sounding in the finest form of his extinguished career. 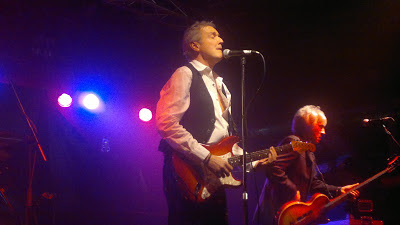 The new 'Only Foolin' gets an airing, proving that FM have lost none of the quality over the years, and are in fine fettle indeed. Jupp seems slightly excited by the young girl at the front a few people away from me. I think she’d have worked her way thru all 3 bands given the chance! As short sets go, this one has all the greats old, and new – ‘That Girl’, ‘Over You’, ‘Burning My Heart Down’, ‘Bad Luck’ and ‘Grapevine’ where Overland produces vocal runs that would give divas a run for their money. The icing would have been if they had finished with fan fave ‘Hot Legs’. 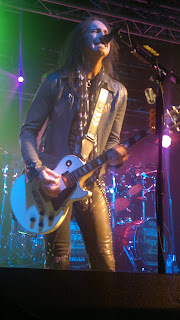 Thin Lizzy are on their 'farewell' tour. I caught the original farewell in 82/83, and its fair to say that Lizzy have been steered with a honest pair of hands in Ricky Warwick. Staying true to original versions, he handles the vocals extremely well, at no point do you feel disappointed that Lizzy in their current form.

I’ve always had reservations about bands in this situation, touring without charismatic and in this case a talisman in Lynott, but you know that Lizzy have a superb set of songs that still deserve to be heard today. They’ve influenced many band, and have been often imitated, but never bettered. 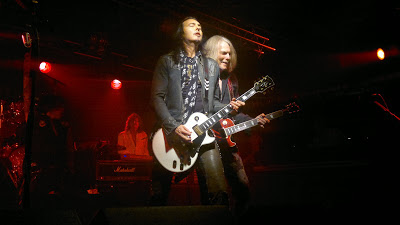 The legendary staples from Live and Dangerous era were present, ‘Jailbreak’, ‘Dont Believe a Word’, ‘Massacre’, ‘Still In Love With You’ (with Wharton and Warwick sharing vocal duties), and finishing with a last set of 8 songs that are all modern era rock classics. 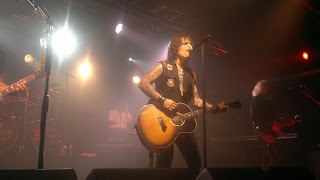 ‘Whiskey’ goes down a treat, ‘Sha La La’ follows with the same Downey solo  from way back, builing the tension with each passing song, ‘Suicide’, ‘Cowboy Song’ with shitloads of crowd howling, before the last track of the show, the enigmatic anthem, ‘The Boys Are Back In Town’. They even roll out a few songs that didn’t get much live airing back in the day, the bombastic closer ‘Black Rose’, the underrated ‘Chinatown’ and ‘Angel of Death’. The twin guitar assault of Gorham and Johnson is excellent, with Johnson playing his solos true to the originals with a sense of  legacy being played out from him. Mendoza just doesn’t stop playing to the crowd all night, his energy levels are outstanding.

Whilst there’s been some reticence over a new Lizzy album, I suspect that there’s some decent songs to be heard from these guys. Sure it’s almost sacrilege to release under the Lizzy name, but they are a band that deserves to continue. After Lynott, Warwick is a fine frontman indeed, and it’s been a delight to witness this version carrying the Lynott legacy into the 21st Century

British rock is in fine shape indeed. Live gigs don’t get much better than this!