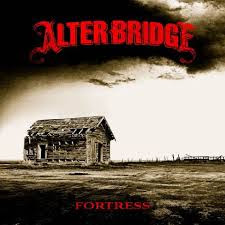 Well! That bloody lasted about 4 days. Less than a week ago I (wrongly) predicted that the debut album by The Temperance Movement was probably my album of the year. Damn you Alter Bridge for topping a fine debut album.

Fortress is the 4th album from the US quartet, who have now firmly shaken the Creed tag away for good. What I mean to say is that Creed was always hanging around the guys, but now that tag can be removed as Fortress is 100% Alter Bridge and is 100 miles removed from them (Creed).

All I can say as an intro is that anyone of a slightly nervous disposition must undertake stringent medical tests from their doctor before proceeding to listen as this beast will make you look like an extra from World War Z / Walking Dead, as the ferocity of the riffs will splay your entrails for all to see. Yes it’s a brutal statement, but I didn’t think they would top ‘Blackbird’, but its been surpassed and then some’

Alter Bridge have definitely gone for the jugular this time around. The songs are fiercer, much heavier than all before, and downright pulverizing. You’re lulled into a nice sense of security with the opening classical/flamenco guitar on ‘Cry Of Achilles’ before Tremonti steps in and removes the wax from your ears. The bloke is a veritable riff machine. Its definitely Alter Bridge, but on steroids, and at six and a half minutes it feels like a three minute single. Tremonti and Marshall trade pounding licks with Kennedy’s multi octave wail playing a vocal fiddle to the metal orchestra.

‘Addicted To Pain’, is the first video and single, and sounds like it wouldn’t have been amiss if it was on Tremonti’s ‘All I Was’. ‘Bleed It Dry’ continues in the same  chugging style, before they tame it down slightly for ‘Lover.’ ‘Calm The Fire’ has the sound of a collaboration with Matt Bellamy of Muse as it has that pompous and overblown into that is a Muse trademark. Top marks to Marshall as his bass playing is really at the front of this album, and along with Phillips drives this album on at such a pace, I feel knackered just listening to it. 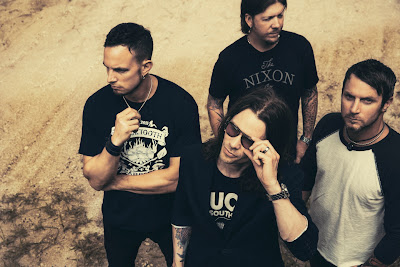 ‘Waters Rising’ sees a nice change for Fortress with Tremonti taking over lead vocals in its entirety, and Kennedy chipping in on BVs. It sounds more vintage/classic rock Alter Bridge than the rest. A cool game change, but Alter Bridge wouldn’t be Alter Bridge without the vocal powerhouse of Myles Kennedy who just exceeds himself (and excels) with every passing album. Just when I think he’s peaked, he packs in another stellar performance. ‘Farther Than The Sun’ is a proper chest pounder and when played live will be an absolute tour de force. ‘Fortress’ is this albums ‘Blackbird’, with Alter Bridge ending on an all-conquering bombastic high. ‘All Ends Well’ is the one which sounds most like the Alter Bridge we have all come to love on the previous 3 albums. But music is about change and development, and Alter Bridge have definitely hit the ground running with ‘Fortress.’ I loved ‘ABIII’ and really thought the peak was with ‘Blackbird’, but Alter Bridge have an album here of such power and face melting force that it will undoubtedly be at the very top of many a magazine and reviewer’s lists come the end of the year.

2013 sees them become masters of their own destiny and the Creed references of the past have well and truly been terminated and laid to rest. With Fortress they simply can’t fail to bring in new fans, and drive on to become a huge band over the course of the next year or so. All the cards are firmly in place for metal domination. All hail Plankton! Er, I mean Alter Bridge!!!!

Its not very often I give an album full marks, but in this instance its fully deserving!!