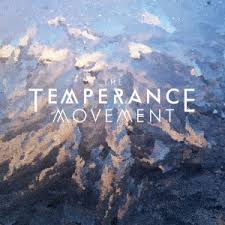 Now, I was completely discombobulated a few weeks ago whilst attending Steel House Festival in Ebbw Vale. The reason for this was a very astute and utterly mesmerizing performance by The Temperance Movement. Yes I’d heard a few good things about our home-grown wave makers, but this was one of the bands over the whole weekend who I was very keen to hear.

Oh boy they didn't disappoint, throwing in one the best performances of the whole weekend
So when I heard there was the debut album up for almost immediate release, I had to review it.

Formed at the end of 2011, the band comprises of Glasgow-born singer Phil Campbell & Londoners Paul Sayer, Luke Potashnick and Nick Fyffe, plus Aussie Damon Wilson. The Temperance Movement blend crafted harmonies, rich laconic rock n roll swagger and earthy, folk tinged melodies with the British blues explosion.  Singer Phil Campbell is a mix of Joe Cocker & Jimmy Barnes. Not a bad combination in my books, or a normal one come to think of it, but a bloody good one if I do say so myself

TTM Are a band marinated in classic blues rock, and cooked to perfection at gas mark 4 - drawing their amazing sound from The Faces, Nazareth and Free. Inevitable conclusions will undoubtedly be made with The Black Crowes, but The Temperance Movement have enough quality to stand on their own two feet than to be bothered with petty comparisons. Heck, mark my words, a time will come when TTM are the ones to be compared with

The album kicks off with ‘Only Friend’ and never ever lets go until the final bars of ‘Smouldering’. As soon as Campbell opens is mouth on Only Friend, its clear that a new talent has been found, and this soulful, gravelly tone combined with the simplicity and organic interplay between guitarists Sayer and Potashnick, make for one effective result!

Theres a swagger to be heard in ‘Aint No Telling’, and the soulful ‘Pride’ reminds me of Coverdales early foray away from the Purps with Northwinds. ‘Midnight Black’ is a lively kick ass track thatdoresnt let you off its leash. If Creedence Clearwater Revival are your delight then ‘MB’ sees TTM pay it back by the bucketload. ‘Be Lucky’ takes a simple riff and applies a simple chorus and hits a musical pot of gold at the end of a Rainbow. Simple works a treat! ‘Morning Riders’ hits home with a harder riff than most on the album, and ‘Take It Back’ has the potential to be a lengthy audience participation number on the live scene with its punchy ‘whoa-o-oa!’ threading thru the song. The debut is over all too soon with ‘Smouldering’, a slow burner which fully advertises the bands talents

The debut is superb and hopefully it will see the lads get all the success they deserve. Whilst its great, TTM will be on tour in the UK Sept onward and I cant think of a better way of spending £10 on a ticket and seeing a band at such intimate venues and on fire as these babies take on a different life in a live environment. I sware that it wont be long before you can get this close to them. They are gonna be huge I tell ya….HUGE!

If it’s not in the top 3 of most a reviewer across the land come December, then I have to admit that I know fuck all about music

View the tour flyer at http://earacherecords.com/myspace/ttm_eu2013.jpg

The Temperance Movement are: