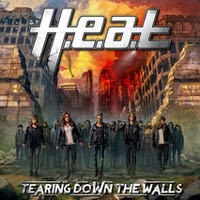 It was only a couple of years ago when H.E.A.T.'s last album, got people a little excited in the trouser department, with many listing it in their top albums of the year. After a critically exclaimed album such as ‘Address The Nation’, could the young Swedes match, if not better it?

Since enlisting Swedish Idol winner Eric Gronwall a couple of years ago, H.E.A.T. haven’t really looked back. He is a perfect foil for them; young, athletic performances, but more importantly he has a killer set of vocals. Making them one of Europe (and soon the World’s) hottest properties, and the best thing to come out of Sweden since SAAB and ABBA.

Opening track, ‘The Point Of No Return’ is an anthem of killer proportions. It has all the flair and overblown pomposity that is fast becoming a H.E.A.T. official trademark - instantly memorable with more hooks than most can muster on a whole album. This song is huge. If you think that this song has its best song as the opener like many do then you’re wrong. 'A Shot At Redemption' takes the quality up quite a few notches – part Bryan Adams, and part Bon Jovi (Slippery era), H.E.A.T. bring their 'A' game to songwriting and performing, with 'Redemption' surely marked as a live highlight. 'Inferno' has a hook and bass line that just punches you in the nuts and refuses to let go – like a shark chomping on his fave food (poodles I think?) 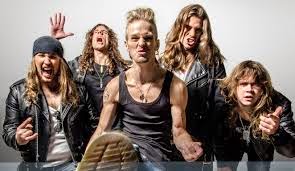 'Tearing Down The Walls' again is the Swedes go at a power ballad – think mega band Aerosmith doing ‘Don’t Wanna Miss A Thing’ and you’re in the right area. 'Mannequin Show' has an eerie 80s shock horror keyboard sound, making it sound like Britney meets Abba! Not in a bad way I have to add. It surely cant be me that’s picking up on the Britney influence. 'We Will Never Die' is another slab of musical anthem-ness. HEAT have a tried and tested “whooa!’ formula and they are sticking to it.

'All The Nights' is a beautifully constructed ballad for all types and generations. As I'm getting older Im getting less tolerant for ballads. In this instance it’s a perfect foil for the power of what has proceeded and what is to come. Gronwall shines with his emotive and fragile vocals. 'Eye For An Eye' – blah, blah! Catchy as all the others! Blah! Shit!!!!! It’s hard to come up with new platitudes when each track is as good as the last. 'Enemy In Me' sees the lads go a bit sleazy Shinedown on it, before coming back for the stadum anthem 'Laughing At Tomorrow'.

Not wanting just to please the rock fraternity, I'm certain that H.E.A.T. are one of those bands that could make the crossover. Lets face it JBJ has done fuck all of interest the past 10 years or so. The young guns are ready to take over the world, and their name is HEAT!

When you have listened to as many albums as I have these past 30-odd years, it’s a little difficult to give out top marks, especially when rock music was in its ascendency in the 80s. If there is better album in 2014 than this, then I will show my arse in M&S shop window come December!! Not a duff track on it.