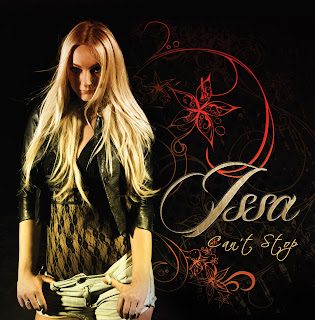 Isabell ‘Issa’ Overseen is undoubtedly a woman on a mission to drive her brand of melodic rock to the masses, with ‘Can’t Stop’, her third outing in a many years. With her now trademark sound, and let face it guys, her looks are certainly appealing when compared against other AOR artistes, thankfully!

Issa, the Norwegian Rock Diva, is back with a blistering new album “Can’t Stop”: a collection of carefully selected hidden AOR gems (some maybe so obscure that you’ve never heard them until now!) that the singer treats her own way.  These tracks have been originally included on albums by Mark Free, Aviator, 21 Guns, Atlantic, Regatta, Worrall, Blvd, Tower City and others.

Issa has created her own style and approach to Melodic Rock by mixing her peculiar and unique melodic sensibility with a rocking attitude which is unseen in today’s Pop singers: real rock with a commercial sheen. These reworking’s show how Issa is at ease when working on classic AOR musical material.

Her versions ooze class and update to the modern day some truly immortal melodies with some masterful arrangements provided by one of the popular ‘go to’ producers of recent times, Alessandro Delvecchio (Hardline).

Since her debut “Sign of Angels”, she has often been compared to such music stars as Celine Dion, Avril Lavigne and Amy Lee (Evanescence). Though she is now ready to take her legitimate place in-between the great AOR chanteuses such as Ann Wilson and Robin Beck.  Come on Frontiers, given the choice I’m sure she would prefer the former comparisons than the latter as there’s not many AOR acts making shitloads of money nowadays. But, “Can’t Stop” shows that Issa is a solid Rock Music star and a true uprising Rock diva, who can be a game-changer in this genre if this is the path she chooses to stay in.

As much as I love melodic rock, I must admit that many of my fave singers belong to the female persuasion as a female voice suits AOR superbly – Robin Beck, Pat Benatar, Leigh Matty, to name just three. As good as the originals are, cover versions either rock your boat or they don’t. I personally love a different take on an original and in Issa’s case, the songs have been so well produced that they are very fresh and sound original. Songs that maybe sound a little dated as originals have been brought back to life. It could have been east to turn out classics by the likes of Journey, Foreigner etc., but that Serafino bloke’s a smart cookie, picking such obscurities that adds to the intrigue and makes you want to check out the originals. If he was really clever, he would also be holding the rights to the originals

Anyway, Can’t Stop is chock full of old, and now new, classics. The shining highlights (for me) are the title track ‘Can’t Stop’ and Aviator classic given a production boost and a half, ‘If You Ever Fall’ a Mark Mangold slice of AOR greatness and Issa almost matches the original, ‘Power Over Me’ as catchy as that bastard Carly Rae Jepson song I can’t get out my head every time I hear the bleeding thing, ‘I Won’t Surrender’ (how the original wasn’t huge is a travesty!) and ‘Dream On’. Issa and Serafino have done a great job here in bringing long lost classics to a new (and old audience), although nothing is ever lost if you look on Youtube.  Great versions of great originals

Just in case you don’t know, here’s the list of original artistes....