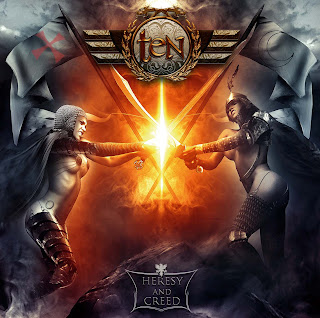 Spoiler Alert! Gary Hughes & Ten have another album chock full of lush, polished production and overblown pomposity. He never goes for ‘piece of piss’ compositions, most have to be some form of symphonic masterpiece.

Now the old PR fella (or lady) have obviously been sniffing the magic markers, as this has been labelled up as ‘’ a true classic Ten and a groundbreaking, monumental album in more ways than one: classic hook laden songs. Power and melancholy with not a single ‘filler’ in sight.’’ You’ve gotta love ‘em!

Now most people who know a thing or two about Melodic Rock will no doubt be aware of Mr.Hughes’ / Ten’s background..for those who don’t here’s a brief rundown. A long time ago in a galaxy (Manchester) far, far away……..

After two successful solo albums, British vocalist/songwriter Gary Hughes was making the preparations to begin recording what was to be his next two solo albums. 28 songs that were to be divided into two albums - one Rockers and one Ballads.  After other musicians were brought in to play on the material, the music became more band orientated and thus Ten was born. Yay!

Mike Stone (Asia, Journey, Whitesnake) was assigned to mix the initial albums, marking the first official incarnation of Ten. The debut “X” was released in May 1996, becoming an instant success. The second album “The Name of the Rose” ( a storming piece of work) came out next, and hot on its heel in ’97 came another belter “The Robe”. Subsequent albums followed quickly. “Never Say Goodbye” (a double live album),  “Spellbound” with well-known producer Rafe Mckenna (Giant, Bad Company). “Babylon”, which was released in August 2000 and featured renowned keyboard player Don Airey (Ozzy, Rainbow, Deep Purple) in the lineup. During this time Gary Hughes also wrote three very popular solo albums for ‘Pointy’ Bob Catley (Magnum) a solo album in a more melodic direction for himself that included “Precious Ones” and the two part critically acclaimed rock opera project named “Once and Future King” which saw the participation of such special guests as Damian Wilson, Bob Catley, Dougie White, Sean Harris, Danny Vaughn, Lana Lane, Irene Jansen, DC Cooper, Sabine Edelbacher and Harry Hess. He’s one busy bloke.

In August 2006 the band released “The Twilight Chronicles”, before taking some sabbatical years. Ten reappeared with 'Stormwarning' in early 2011, and proved he could still cut the mustard. And has seen a renaissance for Ten.

Songwriter Gary Hughes worked hard to live up to the expectations surrounding Ten’s new album, and aptly is their tenth studio album.Not just an Arabian title, Hughes goes for the full Arabian effect on the intro and 'Arabian Knights' (unfortunately he doesn’t shout ‘Size of an elephant’ at any point during the song. Bugger!).

As usual he sets out the stall for the symphonic aural hammering for the discerning listener. One thing is certain, the guitar playing is absolutely bloody superb. If Hughes paid Mitchel and Halliwell by the note, they’d be rich I tell ya…RICH!!!

Gary Hughes more than makes up for his vocal range in quality songwriting, I find that he’s probably a bit deeper now than he has been, but it’s a small gripe of mine that I need to let go of. ‘Gunrunning is a very nice slice of melodic catchiness. There’s enough layers here with keyboards etc to whet the AOR fanatics appetites.

Fuck me, what’s up next will surely see Hughes fight a lawsuit from Messers Simon and Garfunkel. Ravens Eye is so blatant a steal from Scarborough Fair, it’s almost a complete pisstake. It’s a mainly acoustic number which is entertaining enough but I’d be constantly looking over my shoulder in future for S&G’s lawyers.  It does go a bit Lizzy on us in the mid section, but it’s a more ‘oomphed’ and polished up Scarborough Fair. Right Now opens with a bit of 80s keyboard refrain before a very tasty and tidy riff takes over and is probably the first instance I can hear where Hughes states the diversity from previous efforts as it is a departure from the norm for Ten, and proved to be a definite highlight.

The Last Time is where Gary Hughes’ voice truly shines, he was just made to sing this type of thoughtful ballad, and is probably one of the best ballads that Ten have ever done.
As usual the production from one Dennis Ward is mighty. I don’t think this fella has a duff production under his belt, and Hughes/Ward make a perfect partnership.

Gary Hughes and Ten are truly the Kings of British melodic Rock, bar none.

If you cant make Firefest this weekend, please go and see them at a very special event in Wigan for ‘Rock For Anne’ Charity event at Maximes Two on the 23.11.12