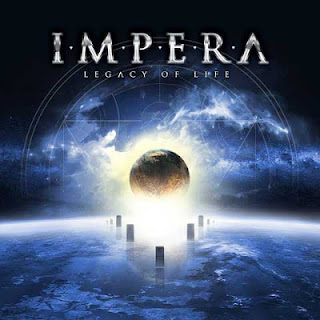 Impera, the band is the brainchild of drummer J.K Impera who acts as the commander in chief in this state of rock.

”I started the band three years ago, and originally ex-Mötley Crüe vocalist John Corabi was on board to handle vocal duties”, J.K. says. ”However, our schedules couldn’t be matched, so I opted for a good friend of mine, who also happens to be one of Sweden’s best rock vocalists ever, Matti Alfonzetti”. In that choice alone, he found the goose that laid the golden egg!!!!

The whole band consists of solid musicians who have earned their wings through hard work with an impressive number of world-class stars over the years. Their combined CV reads as a who’s who in today’s rock. In various constellations they have played with Vinnie Vincent and Bruce Kulick from KISS, Brian Robertson from THIN LIZZY, John Levén from EUROPE and many more. Guitarist Tommy Denander alone has played with almost everyone. His track record is jaw-dropping, having made solo albums with key members of TOTO and performed on albums with Michael Jackson, Paul Stanley, Alice Cooper, Ricky Martin and Celine Dion. He recently toured Japan and Europe with Joe Lynn Turner of RAINBOW/MALMSTEEN fame, Toto’s Bobby Kimball and Chicago’s Bill Champlin. He is considered one of the world’s best session players and has contributed his axe work on an unsurpassed 2000+ albums. Yikes!!

Keeping the bass at a level where earthquake sensors go haywire, Mats Vassfjord is no stranger to bands, having toured with Scaar, and Grand Design and Laney’s Legion.

Alfonzetti has been a sought-after voice for years with domestic success with Bam Bam Boys, Road To Ruin and Skintrade, as well as international stints with Red White & Blues, Scott Gorham from Thin Lizzy and British band Jagged Edge with whom he shared stages with the likes of Lita Ford, David Lee Roth, Vixen and Dan Reed. J.K. Impera himself can brag about having played with a number of KISS members, Graham Bonnet, John Corabi, to mention a few.

The name is Latin for “ruler”, but will Impera truly rule the airwaves?? IMPERA’s style lies firmly on a classic hard rock ground with a dose of strong melodies collected from the AOR-world.

There are some vocalists that can make a good album great, and some have the ability to truly polish a turd. Matt Alfonzetti is such a vocalist. I have to add here that this album is no such turd to begin with, Im just stating a fact. His presence alone will surely made a difference to Impera’s bank balance over the coming months. Its nothing fancy here, just pure unadulterated classic rock tunes. ‘Turn My Heart To Stone’ is a great choice to open up the album, decent riff, and an even better chorus. The classic rock /melodic rock vein is in rich form from the off, with the likes of the high tempo 'Shoot Me Down' in particular, along with 'Sunset Rider' and 'Kiss Of Death' being definite highlights. Lots of people with think that this has been done before, but what hasn’t? I know plenty of my classic rock / melodic rock chums that will lap this stuff up in droves…and rightly fucking so!! It looks like the band have consulted the Heavy Metal Songbook Manual, as there a a few songs that have done the rounds before…I mean the song titles. 'Kiss Of Death, More Than meets The Eye, and Is This Love', but thankfully they don’t attempt to cover the originals

We have four very experienced guys doing what they do (very well) and the end result is a walk in the park to them, with a polished album indeed. At least 50% of the tracks are very good indeed, with the other half being reasonable but nowhere near that turd I first talked about

If I could give just one bit of advise to the founder J.K.Impera…drop the makeup matey, you look a bit of a twat. (See pic below!) It's a good job the albums good!! 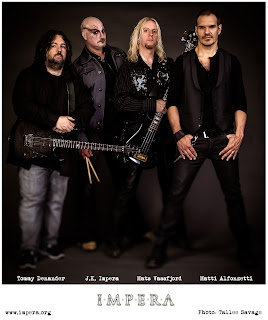