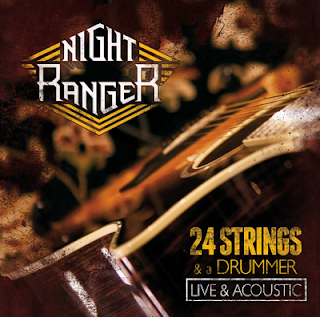 The 90s heralded a change in format for many a rock band. MTV kicked off their unplugged series, and some of them were damned good. Looking back, Pearl Jam and Queensryche were personal favourites in this MTV format. Then Tesla came along a blew away all-comers with their 'Five Man Acoustical Jam'. Just like 'Mindcrime' is the modern concept album to be judged by, Tesla followed suit with 'FMAJ'. Everyone tried it in the 90s, and I mean everyone, come with not so favourable results unfortunately.You know who you are.

So 2012, sees one of USA’s finest taking on the acoustic genre, 20 years later than the rest. Me personally, I'd rather see them come out with a live set of rockers, especially as their (and I use this term in its loosest sense) ‘UK Tour’ consisted of one gig in London, 2 yrs in succession. Go North next time!!!!!! So yes I'm jealous that I couldn’t go to London twice to see them. I'm over it now, nah I'm not!

Anywho with a back catalogue like 'the Rangers' have, it’s a positive shoe in for some of their faves, and not so faves to be converted acoustically. As a celebration of the 30th anniversary of their debut album, Night Ranger has planned a very special release: an album/DVD recorded live in an intimate all-acoustic setting, with a select number of fans at The Studio D Recording in Sausalito, CA in May 2012.  The result is compelling and exciting live renditions of the band’s classic hits with new, refreshing arrangements; tracks include “(You Can Still) Rock In America”, “Sister Christian”, “This Boy Needs To Rock” or “Four In The Morning.”

Titled 24 Strings and a Drummer, it asks the question of keyboardist Eric Levy. He clearly plays a part, as he proves on his intro to Sentimental Street, so throw in the number of keys as well!!!

Night Ranger start of with some well known tried and tested faves, ‘This Boy Needs To Rock', & 'When You Close Your Eyes'. The newer and very decent 'Growing Up In California', gets an airing, but the first ‘prick of the ears’ moment is the very cool 'Secret Of My Success'. Night Ranger wouldn’t be Night Ranger if they didn’t have the golden tonsils of Kelly Keagy, and still shows he has what it takes on their mega hits Goodbye and Sister Christian. I love Jack Blades to bits, but Keagy gives them a different sound. The band really sound as if they are enjoying the gig immensely.

Don’t Tell Me You Love Me is as good as the electric version, and they close out with 2 highlights in You Can Still Rock In America, and a cover of Don Henly’s Boys Of Summer.

Despite me personally wanting a full on electric live album, Night Ranger (and Frontiers) know much better than me as the acoustic album we have here is a delight. I just wish I’d gotten the DVD to review as well, as I much prefer to see live gigs than just listening to the buggers

24 Strings and a Drummer (and a keyboard) shows what a legacy of songs that Night Ranger have in their song writing portfolio. I’d have loved to have seen them play something (nay,anything) from the very underrated Man In Motion. Again, I know nothing!