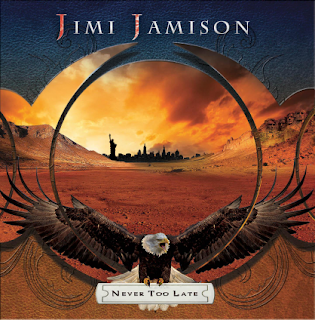 Often referred to as one of the American top Rock vocalists, Jimi Jamison has been the singer with Target, Cobra and finally Survivor – who rejoined in late 2011 - for more than a decade, apart from being an accomplished solo artist on his own.

Jimi performed back up vocals on recordings by ZZ Top, Joe Walsh and numerous other recording artists. Billy Gibbons refers to Jimi as the fourth member of ZZ Top and Casey Kasem (kids of a certain age know him as the voice of Shaggy, in Scooby Doo, before Scrappy came on the scene and fuckin' ruined it!!), on his nationally syndicated radio show American Top 40, referred to Jimi Jamison as “The Voice”. Among Jamison’s best known performances are "Burning Heart", from the Rocky IV movie which hit #2 on the Billboard Charts, "High On You" (#8), and "The Search Is Over" (#4).

His solo career started in 1991 with the release of “When Love Comes Down” followed in 1999 by “Empires”, the album which included the theme, "I'm Always Here" for Baywatch. In 2008 he teamed up with ex Survivor band mate, Jim Peterik who wrote and produced for him the acclaimed album “Crossroads Moment”. On the heels of this superb release, Jimi toured Europe a few times and culminated with an appearance at the popular Firefest in the UK in 2011.

In the meanwhile Jamison started to work together with Swedish songwriter and producer Erik Mårtensson (W.E.T., Eclipse etc), who had met “virtually” while working on the successful Kimball Jamison duet album to which Mårtensson had contributed with some songwriting.

So there you have it, whether you admit to it or not, practically everyone knows Jimi Jamison, unless you’ve been living under a rock, or in a cave for the last 30 yrs, or if you thought your dad had a surname called Fritzl!!

So what we have here is a mighty fine slice of modern contemporary melodic rock. The heaviest he’s done (as Frontiers PR states)? I’m not so certain of that, considering other Mårtensson projects (Eclipse and Toby Hitchcock) this year have rocked (much) harder than this album. That aside, it’s the best album that Jamison has put his John Hancock to quite some time indeed.

‘Everybody's Got A Broken heart’ and 'The Great Unknown' really kick the album off to a great start with Jamison's trademark vocals having more polish than Mr Sheen's door knob. Couple this with infectious choruses and more licks than my dog can muster, and 'Never Too Late' doesn’t look back for a moment. We also get out obligatory ballads. If you want ballads, then there's a feast of them in the way of the excellent ‘The Air I Breathe’ and the heartbreaking, ‘Heaven Call Your Name’.

If you’ve a hankering for 80s Survivor themed songs then look no further than 'Never Too Late' as Mårtensson has delivered a set of songs that they can both be very proud of. ‘I Cant Turn Back’ is huge, and stands up well against any previous Survivor song. ‘Street Survivor’ is and edgier song than most, think Survivor on Viagra!

With a voice that has not waivered over the years, I can see this in many a melodic rock fans Top 10 albums of the year

Tracklisting: Everybody's Got A Broken Heart; The Great Unknown; Never Too Late; I Can't Turn Back; Street Survivor; The Air I Breathe; Not Tonight; Calling The Game; Bullet In The Gun; Heaven Call Your Name; Walk On (Wildest Dreams).